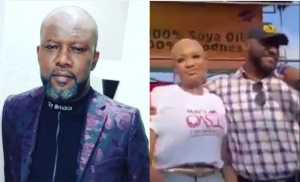 Uche Edochie, brother of popular actor, Yul Edochie has openly supported his brother’s decision to reconcile with his first wife.

Yul and May Edochie were seen together in public for the first time after their marriage had become strained as a result of his affair and marriage to Judy Austin, a fellow actress.

Over the weekend however, the actor surprised his wife May at the inauguration of her charity. May Yul Edochie won hearts by giving back to society in honor of her birthday.

Rather than throw a party for her birthday, May Edochie gave back to the community through her foundation, May’s Oasis Foundation.

A video that made rounds showed the actor, Yul Edochie showing support for his wife. The actor is seen making a speech which was interrupted when someone from the crowd shouted, “What God has joined together”.

The actor finished it with, “No man can put asunder”.

Further speaking, he stated that he came out to support her and to double her offer to the needy.

He said, “I said let me come today and support her and everyone. Thank you. Everything she says she will do for you, we will double it”.

READ ALSO: “She Is Not My Estranged Wife, We Are Living Together” – Yul Edochie

May Edochie’s countenance as the actor held tightly to her and tried playing with her, has sparked mixed reactions.

The majority commented how the mother of four seemed unhappy and was only trying to make her marriage work.

Now defending his brother, Uche questioned if he should remain condemned forever. He added that when one makes an irreversible mistake in his life, how does he expect to be treated by society.

He said, “We can’t handle the truth. Everyone keeps bitching how society isn’t progressing. Do you know? Because humans haven’t learned how to look at themselves in the mirror and accept themselves for the flawed character that they have. We like to think we are better than others but we aren’t”.