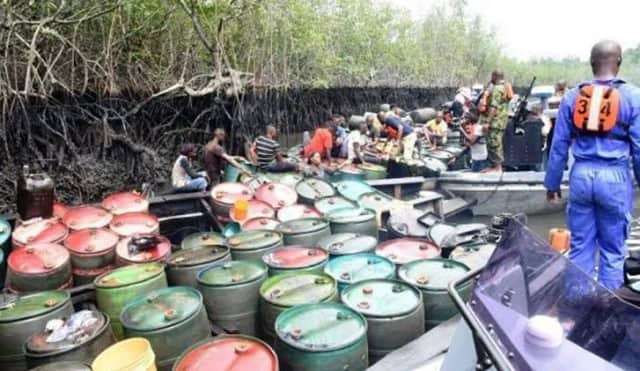 The Chairman, Senate Committee on Petroleum (Upstream), Sen. Bassey Albert Akpan, disclosed this on Tuesday in Abuja, to newsmen shortly after presenting the report of Senate ad hoc committee on oil lifting, theft and the impact on petroleum production and oil revenues.

The Federal Government in August, landed itself in the eye of the storm in the Niger-Delta region, after it awarded a pipeline surveillance contract to a private security outfit, Tantita Security Services led by a private citizen, a former leader of the militant group, the Movement for the Emancipation of Niger Delta, Government Ekpemupolo, popularly known as Tompolo.

This new deal, brokered by the Minister of State for Petroleum, Timipre Sylva and top officials of the Nigerian National Petroleum Corporation (NNPC) Limited, was described as a renewal, as it is similar to the one awarded to him by former president Goodluck Jonathan which President Muhammadu Buhari had cancelled months after assuming office, as he declared Tompolo wanted.

The Buhari government however later backtracked and agreed to engage Tompolo to put an end to the illegal bunkering, illegal refining and oil theft in Niger-Delta communities which had deprived the country of huge revenue remittance to the federation account.

In a bid to defend the awarding of the contract to the ex-Niger-Delta militant warlord, the government said it took the best decision to hire private contractors to man its oil pipelines nationwide, rather than its security personnel, adding that it was in the best interest of the people.

Justifying the controversial contract award to the ex-militant, the Chief Executive Officer of the Nigerian National Petroleum Company Limited, Mele Kyari clarified that the contract was not awarded to the Niger-Delta warlord as a person, but to a company.

An informed source told The Vanguard that at least 80 per cent of pumped crude oil to oil terminals in the country ends up with big-time oil thieves with security operatives who act as their escorts.

”If you pump 239,000 barrels of crude oil into either of the Trans-Niger Pipeline or the Nembe Creek Trunk Line (these are some of the major pipelines that convey crude oil to the terminals for export), they will receive 3,000 barrels. It got to a point where it was no longer economically sustainable to pump crude into the lines and a force majeure was declared,” he stated.

“With security operatives as escorts, they lead them outside the country’s waters and leave the crew and other members to proceed to purchasers in foreign countries. The vessels are basically labeled as untouchable in Nigerian waters because of the caliber of the owners, causing the country to lose billions of dollars,” he revealed.

A retired security expert also told the news outfit that, “There is no way they will arrest the big-time oil thieves under the current set up because those in-charge of security are part of the cartel and those you have sent to stop them are part of the business.”

The move has generated serious concerns as many have kicked against it. During a Channels TV’s Sunrise Daily programme on October 17, Human rights lawyer, Femi Falana described the award of pipeline surveillance contract to Tompolo as a “colossal embarrassment” to security agencies in the country.

Falana stated that the surveillance contract to Tompolo by the president should have prompted the security chiefs to resign from their positions as the move was a prove that the president had lost confidence in their competence to perform their primary duty which he was awarded a contract to a private citizen for.

“In the first place, the President has demonstrably lost confidence in the competence of the military hence a contract has been awarded to a non-state actor, Mr Government aka Tompolo who is said to be making these discoveries now.

“That itself is a colossal embarrassment to a state that is supposed to be functional,” he added. Ordinarily, the service chiefs should simply have resigned that Mr President you have lost confidence in us,” he added.

However, speaking to Information Nigeria on the development, Convener of the Forum of Ethnic Nationalities of Niger Delta, who also serves as the President, Ijaw Community Law Centre, Dortimi Kester Tawari, backed the government’s efforts to curb oil theft and pipeline vandalism in the region, stating that government had the right to choose whoever it felt can better perform the duty better than the security agencies.

Tawari said, “If the government felt okay to award a contract to any person; if the agents of cohesion, the army, police, or paramilitary, with all functions or responsibility, accountability directed to Mr President, but the same Mr President didn’t give it to them, it means that there’s a problem. But all we want is to solve a problem, and if he sees that Tompolo is somebody that can solve that problem, so be it.”

He however claimed that the responsibility of securing the pipelines won’t be exclusive to Tompolo, as he would be working hand in hand with security agencies, just like Amotekun, Ebube-Agu work hand in hand with the police, army, civil defense, etc.

“I don’t find any big deal, if you find somebody that can deliver, give it to him, and let the military also make the cover and the backing. That is what I think the military is doing, not that they are arming Tompolo to go and secure pipelines. All that we want is to let crude oil theft and vandalism stop,” he stated.

On the other hand, the human right lawyer asserted that handing over the responsibility of the supervision of the oil pipeline to private individuals or companies was an indictment on the nation’s security agencies. He bemoaned the poor welfare given to security personnel which has gotten many of them compromised in the line of duty.

“Looking at it from the outside, we can say that it was an indictment on the military which we’ve said severally that members of the agency that are supposed to protect the pipelines are compromised.

“Oil theft, vandalism is not just by the people here, it is a high level network of individuals across the divide in Nigeria. Some abroad are also involved, with the compromise of the military and other persons.

“Gallant men and women that go out there in the North East, are disappointed. You hear juniour officers taking up arms against their commanders. That’s because the things they are supposed to get, they don’t get it, and the ones they get are substandard.

“Soldiers are complaining, some have absconded and abandoned their location because they don’t have the fire power to confront these people. We have Tucano helicopters, have we used them? Don’t blame the soldiers, if things are not put in place for them.

“If Nigeria cannot provide the software and the hardware, for the gallant men of the military, to go and confront the criminals and terrorists, what do you want them to do? So, provide for them, give them the training, then they will go and confront them,” he advised.