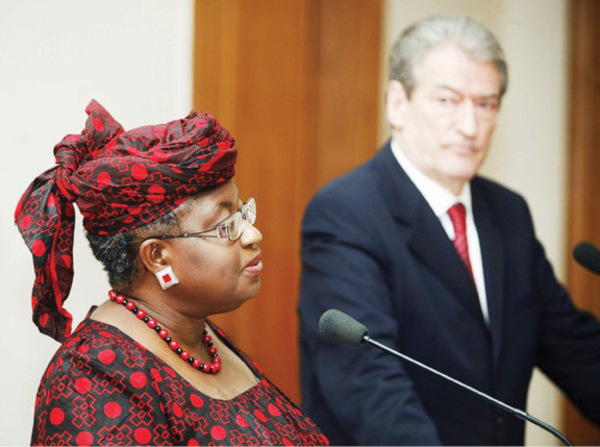 Former finance minister and currently a director of the World Bank, Ngozi Okonjo-Iweala, yesterday called at the headquarters of the State Security Service (SSS) in Abuja for the security screening for ministerial nominees.

Mrs Okonjo-Iweala, who arrived the Asokoro Drive office of the SSS at about 3.30pm alongside other nominees, was taken straight to the hall where the nominees pass through for the screening process.

Her screening has put an end to the speculation on whether she would agree to serve in President Goodluck Jonathan‘s cabinet, following her controversial exit from the cabinet of former President Olusegun Obasanjo.

Even though Mrs Okonjo-Iweala did not speak with the press on the outcome of her visit to the SSS office, sources confided in NEXT that her visit was not unconnected with the ongoing ministerial security screening.

Dressed in her usual traditional attire, she looked robust and full of life as SSS officials took her from one office to the other. She is expected to join other nominees for the Senate screening starting today.

The Senate is expected to receive more nominees, from at least four states that currently do not have nominees, as required by the constitution.

Meanwhile, the Senate will today resume its screening interview for the rest of the 34 ministerial nominees presented for its approval by President Goodluck Jonathan, in addition to the ones that passed the SSS screening yesterday.

It had, last week, screened and approved 14 nominees who were former ministers, all of whom have been returned to their former ministries and positions.

Amongst the others expected to be screened this week include the former finance minister, Olusegun Aganga (Lagos), and former water resources minister, Obadiah Ando (Taraba). Both were scheduled to be screened last week but were skipped after they faced challenges to their nomination from their states.

The Lagos State chapter of the ruling Peoples Democratic Party (PDP) had resisted Mr Aganga’s ministerial nomination, saying he is not from Lagos.

They had equally resisted his nomination in June last year, but Mr Aganga is expected to pass his screening. However, it is doubtful whether he would be renamed finance minister with Mrs Okonjo-Iweala now back in the saddle, although it is also not certain at the moment which role the World Bank executive would be playing in the new administration of Mr Jonathan.

Mr Ando, on the other hand, is resisted by his kinsmen for alleged poor performance in the former cabinet. He has been opposed by politicians in his state who said he “under-performed” and was “inaccessible” in the last regime.

The Senate has also continued the use of its ‘Bow and Go’ screening method for select ministerial nominees, despite its leader’s earlier claim that they would be thorough and just in the process.

This method allows the Senate receive a nominee, hear his/her profile, and let the nominee take a bow and leave, without any grilling. The method presumes the nominee to be perfect and needs no interview or screening.

The leader of the Senate, Victor Ndoma-Egba, had, on Tuesday last week, before the screening began, told reporters that the mood in the Senate was that there would be no preferential treatment for any of the nominees.

The Senate, however, contradicted its leadership on Wednesday when it accorded a former senator, Bala Mohammed, the ‘Bow and Go’ treatment.