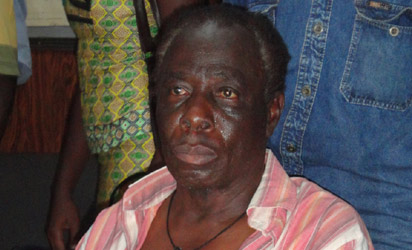 Mr. Michael Obi, Chelsea footballer Mikel Obi’s father who was abducted about 10 days ago while on his way back from work has finally been found by the Nigerian police. Mikel’s dad was last seen on 12 August in Jos, where his car was recovered last Wednesday, he was found today in Kano where he had been transported to after his abduction.

Mr. Michael Obi was found in good condition although his face and body held telltale signs of manhandling. Mikel’s dad’s abduction came shortly after Mikel was listed in the Forbes magazine as earning $5.8million per year. After his dad’s abduction, Mikel played in matches against Stoke City and West Bromwich Albion. After playing against Stoke, Mikel said “I wouldn’t want to let the club down and if I didn’t play that game I think my mum would be very sad,” The  Chelsea manager Andre Villas-Boas had hailed the “amazing mental toughness” shown by the midfielder in the wake of his father’s kidnapping.

Five  suspects were arrested with respect to the abduction of Mikel’s dad who according to the Force Public Relations Officer, Mr. Olusola Amore, was found after policemen raided the suspected hideout of his kidnappers. Obi confirmed that he was taken to Kano by the kidnappers, who demanded a N20m ransom from his family.

Mikel and indeed the entire Obi family have expressed their gratitude over the release of their father, the NFF has also expressed joy over the positive development, the chief media officer of the federation, Ademola Olajire said, “we are very very happy over this development. It is a sign of good things to come as we prepare for the crucial 2012 CAN qualifier against Madagascar.