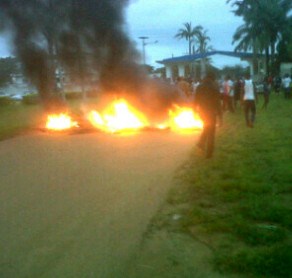 Investigations into the fracas that resulted in the destruction of over 40 vehicles at Igbinedion University, Okada, Edo State on Sunday morning revealed that the warring ex-militants and suspected cultists were quarrelling over a female student of the institution.

Vice-Chancellor of the university, Prof. Eghosa Osaghae who addressed journalists yesterday, denied reports of a shoot out by the students but confirmed that six students were injured during the fracas.  Osaghea disclosed that the state Commissioner of Police, Olayinka Balogun, visited the institution to assess the situation and found that the situation had been brought under control.

“The fact of the matter is that in the early hours of Sunday, there was a misunderstanding among students following the damage to the vehicle of one of them outside the university campus in Okada town. This unfortunately elicited unwarranted reprisal that involved damage to other vehicles by the aggrieved students and their friends.

Both actions ended up in agitation and skirmishes but thankfully no life was lost. We gathered it was boyfriend and girlfriend issues. It was a retaliatory attack.”  According to Osaghae, the injured students had been treated and discharged. He said those undergoing training at the institution were not ex-militants but youths from the Niger Delta region sponsored under the Youth Empowerment Programme in the Niger Delta master plan.

He said those referred to as ex-militants were normal students of the institution who were processed through JAMB and were being paid for by the Federal Government.

An Ijaw leader, Andrew Igiri, urged the students not to see Ijaw youths in the institution as ex-militants but as a process to address youths restiveness in the Niger Delta. Meanwhile, the Presidential Amnesty Office has issued a statement to clarify media reports on the crisis. The statement said, “its students undergoing formal education at the university did not go on rampage on Sunday.

“What actually happened was that some of the amnesty programme students in the institution resisted an attempt by an unnamed cult group members to intimidate one of their colleagues. No life was lost contrary to reports in the media. The police and the school’s authorities have confirmed this in separate press statements on the incident.”

The statement signed by Dan Alabrah, head of media and communication, further said, “this clarification became necessary to dispel inaccurate reports, which created the impression that a group of ex-Niger Delta militants at the institution went on rampage and in the process beheaded two students.

“For purposes of clarity, the incident, according to the police and the school’s authorities, was orchestrated by a cult group, which had on Saturday attacked one of the 245 amnesty programme students in the institution and burnt his Sport Utility Vehicle (SUV).

“Provoked by the attack, the amnesty students were said to have resisted the attempt to intimidate one of their own, who they claimed became a target because he refused to belong to the nefarious group. The cultists were said to have regrouped from Ekpoma and Benin and caused panic in the school on Sunday.”

The Amnesty Office is cooperating with the police to get to the roots of the fracas while the police and the school’s management have since restored normalcy to the institution.

We also wish to state that the amnesty programme remains one of the key successes of the President Goodluck Jonathan administration, and Mr. President has never wavered in his commitment to ensuring that every disarmed and demobilised Niger Delta youth is fully transformed and re-integrated into society.

The Special Adviser to the President on Niger Delta and chairman of the Presidential Amnesty Programme, Kingsley Kuku, remains focused and refuses to be distracted by incidents such as this even as he urges the media to be wary of so-called disgruntled groups in the Niger Delta threatening to shut down the region and the nation’s capital, Abuja, unless their members were included in the amnesty programme.

“The Amnesty Office is aware of a plot to cause a breakdown of law and order in the region. The security organs  in the country are equally aware of this and will ensure the sustenance of peace in the Niger Delta,” Kuku said.