Three kids who narrowly escaped death of the Dana plane crash that crashed into their two-storey building told PM news yesterday that they could not find their parents till then.

A good samaritan has been allowing them pass the night, but they have still told newsmen that they have not yest seen their parents.

The eldest of the three, Joel told P.M.NEWS that their father had asked him and Chisom to go and call Esther who was told to call an electrician from the neighbourhood but had not returned.

He said since Esther was not forthcoming, their father told them to go and call her, saying that it was while they were coming with Esther that the incident occurred.

The children said they could only remember the name of one of their uncles in Abuja by the name Tony Okechukwu.

However, the state government took custody of the children and took them to the State House, Ikeja pending when a relative of theirs would be found.

Commissioner for Information and Strategy, Aderemi Ibirogba told newsmen that the state government had taken custody of the children, saying that their parents might have died in the building.

He said government was ready to take care of the children, saying that they were fully protected. 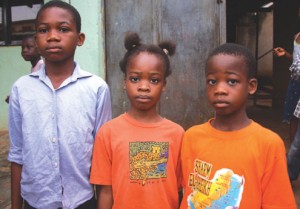