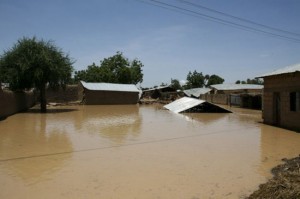 Information emerging from the Nigerian Meteorological Agency has alerted that there will soon be an “above-normal” rainfall in strategic parts of the country which might lead to flooding incidents in 12 States of the federation.

The information, which is contained in a statement made available to newsmen in Abuja on Saturday, and which was signed by Eleazar Obende of NIMET Public Relations Unit, says that the states likely to be affected are: Lagos, Ogun, Delta, Cross River, Akwa Ibom, Bauchi, Gombe, Kano, Katsina, and Jigawa.

In order to reduce the impact the imminent flood, NIMET has urged the affected state governments and the people in these states to clear their drainages and waterways as there was prospect of high intensity or long lasting rains occurring between August and October 2012.

According to the statement: “…In keeping with the mandate to monitor the predictions and give updates as and when necessary, NIMET has observed wetter-than-normal soil surface moisture and groundwater conditions in some parts of the country over the past 12 months. As you are aware, the northern sector of the country will experience peak rainfall during August – October season.

“The effect of the wetter-than-normal conditions observed is the prospects of the occurrence of above-normal rainfall which may lead to surface run-off. The flooding incidents that may accompany further one day high rainfall events in and around Lagos, Ogun, Delta, Cross River, Akwa Ibom, Bauchi, Gombe, Kano, Katsina, and Jigawa states will leave in its trail devastation and destruction reminiscent of similar incidents recorded in some parts of the country some months ago.

“The Nigerian Meteorological Agency (NIMET) advises the government and people in these states to endeavor to clear their drainages as there is high prospect of high intensity or long lasting rains occurring during August – October 2012 as predicted”.