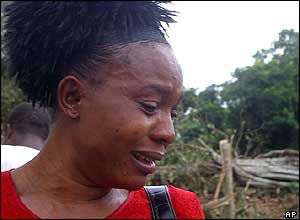 The Police Public Relations Officer, PPRO, Ebonyi State command, Deputy Superintendent of Police, DSP, Sylvester Igbo,  said the suspect who hailed from Umuoru village in Ohaukwu Local government area of the state, was arrested alongside one Mr. Izuchukwu Okeke alleged to have linked the suspect to the buyer, Mrs. Nkiruka Okonkwo.

Vanguard gathered that Mrs. Okonkwo who bought the child for N100, 000 however, took to her heels when argument ensued on the rightful ownership of the child.

Igbo told newsmen that the command was able to unravel the circumstances behind the missing child, when it became obvious that the boy was last seen with the suspect who sold him (the child) at Awka in Anambra state.

“When the parent was looking for the child, the woman (suspect) was also worried and was searching for the child until the information came that the child was seen with the very woman and that she was pretending as if she did not know anything about the missing child. When the pressure became too much for her due to police interrogation, she had to confess to the crime.”

He called on members of the public to always give useful information to the police, assuring that their identity would  be protected even as he warned parents not to leave their children under the care of people with questionable character.

The suspect, Mrs Elizabeth, who spoke in pidgin confessed to the crime, saying, “Na devil. I steal the child and sold him to Mr Izuchukwu Okeke, who gave me the connection. Aloysius is my brother”.
Vanguard Nigeria