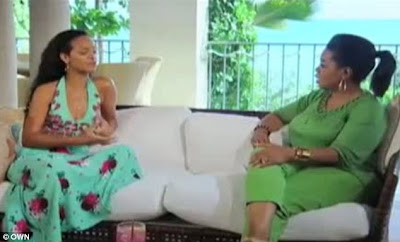 While everyone thought the connection between Rihanna and Chris Brown was totally severed, the music icon displays a rather emotional part of her and serious link with her former boyfriend who was was said to have ended the relationship on a brutal level. Check out what she told Oprah:

‘I felt like the only person they hate right now is him. It was a weird, confusing space to be in.Because as angry as I was – as angry and hurt and betrayed – I just felt like he made that mistake because he needed help. And who’s going to help him? Nobody’s going to say he needs help, everybody’s going to say he’s a monster, without looking at the source. And I was more concerned about him. It was embarrassing it was humiliating… I lost my best friend.’

‘I am super duper terrified of the pedestal that comes with fame..It’s amazing how lonely you can feel.’