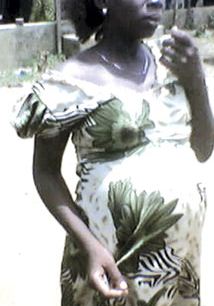 Mrs. Grace Nwangwu, who happened to be an eight-month-old pregnant woman, was weekend, killed in Ikwo Local Government Area of Ebonyi State while she was reportedly trying to steal some food crops in a farm near her house at midnight.

She was said to have been sleeping on the same bed with her husband, Mgbebu till midnight when she left to ease herself outside but reportedly went to farm at Igbudu Community to harvest some food crops and was killed by her assailant.

In a neighbouring Imo State, one Madam Rose Chibuike was also said to have narrowly escaped being beheaded by an attacker along a lonely road at Umezeala, Ehime Mbano Local Government Area of the state by a machete-wielding man.

Newsmen investigations revealed that Madam Chibuike, who runs a pepper-soup joint in Umuezeala, is a native of Ikperejere, Ihitte Uboma Local Government Area of the state.

Mr. Nwangwu, whiule trying to narrate the ordeal, said: “My wife got up around 12 midnight and left the house. She said she was going to ease herself. As she did not come back after some time, I became panicky and went looking for her but to no avail. For the fact that she was nearing delivery, I increased my search for my wife.

“I took a short cut and it paid off. The footpath shortened my search as I suddenly met the lifeless corpse of my wife, lying face down on the ground with the pregnancy. ’’When I saw the lifeless body of my wife I raised an alarm which attracted other villagers to the scene; who then alerted the police before we made a random search for her killer.

In the process, I learnt that the villagers traced spills of blood to a nearby cassava farm where it was suspected that the woman met her waterloo.”

However, when the deceased body which was lying face down was later turned, a deep wound was discovered around her abdomen as the body was still oozing out blood.’’ Contacted, Ebonyi State Police Public Relations Officer, Deputy Superintendent Sylvester Igbo, confirmed the story, adding that investigation had commenced to ascertain the circumstances behind the murder.

Also narrating her ordeal to journalists from her hospital bed, Madam Chibuike who espcaped from her assailant said: “There is every reason to believe that my attacker wanted to behead me on that lonely road.”

According to the lucky woman, she instinctively raised her left hand in self defence when she realised that her life was in danger, adding that her attacker ended up cutting off her hand.

She said that she was returning from her landlord’s house when she was ambushed on the lonely road by the man who she identified as her customer and a native of Umunakanu (names withheld).