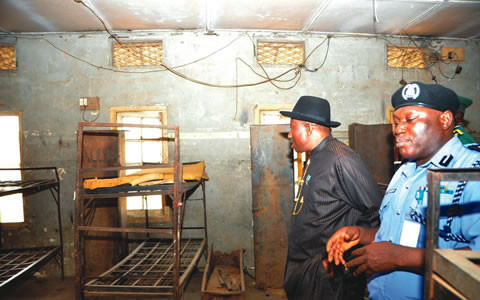 Socio-Economic Rights and Accountability Project (SERAP), has written a petition to the Independent Corrupt Practices and Other Related Offences Commission, ICPC, demanding probe into the rot in Ikeja Police College.

The group had in the petition asked the commission’s head, Mr Ekpo Nta to “urgently and thoroughly probe the spending for police trainees’ welfare for the past 10 years.”

It said that this would “help to establish whether the money budgeted to improve the infrastructure and conditions of police colleges and trainees’ welfare across the country have been spent as allocated or simply stolen, misused or mismanaged.”

In a petition dated January 18, 2013 and signed by SERAP Executive Director, Adetokunbo Mumuni, the group also asked the agency to “ensure that any suspected perpetrators are brought to justice.”

According to the organisation, “recent investigation and documentary by Channels TV showed, among others, that training facilities are in terribly bad shape; that the college is overcrowded (housing 3,000 people instead of 750); that student hostels are in dilapidated conditions and lack beds, mattresses and decent and functional toilets.

“The poor, dehumanising and deteriorating conditions of the Police College, Ikeja and other police colleges across the country seem to explain why the force has been unable for many years to provide adequate security for the common man and to effectively tackle crimes.

“The inhuman and degrading treatment of police trainees, as shown by the Channels documentary also illustrates the deep rooted corruption in critical institutions of government and public services that have been completely neglected for several years,” SERAP noted.

The Commission’s spokesperson, Mr. Folu Olamiti, while confirming receipt of the petition, said  it “is receiving attention from us.”