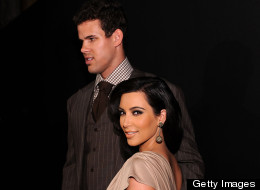 Kim Kardashian has a due date for her baby and now a trial date for her divorce from NBA player Kris Humphries. A judge on Friday set a May 6 trial for the reality TV star who wants to end her marriage before July, when her child with Kanye West is due. Kardashian filed for divorce on Oct. 31, 2011, after she and Humphries had been married just 72 days.

Their lavish, star-studded nuptials were recorded and broadcast by E! Entertainment Television. The trial is expected to last three to five days and could reveal details about Kardashian’s reality show empire, which includes “Keeping Up With the Kardashians” and several spinoffs. Two judges determined Friday that Humphries’ lawyers had adequate time to prepare for the trial. Humphries wants the marriage annulled based on his claim that Kardashian only married him for the sake of her show.

She denies that allegation and says the case should be resolved through what would be her second divorce. Humphries’ attorney Marshall Waller asked for a delay until basketball season is over. But Superior Court Judge Scott Gordon refused, saying firefighters, police officers, truck drivers and others have to miss work for trials, and Humphries must do the same if necessary. Waller filed paperwork Thursday to withdraw from the case but didn’t mention that development in court and refused to answer any questions about the document on Friday.

Waller said he was still hoping to obtain and review 13,000 hours of footage from Kardashian’s reality shows to try to prove the fraud claim but noted he does not yet have an agreement to receive the footage. Kardashian’s lawyer said her client was ready for trial. “Let’s get this case dispensed with,” attorney Laura Wasser said. Humphries has provided a deposition in the case, as have West and Kardashian family matriarch Kris Jenner.