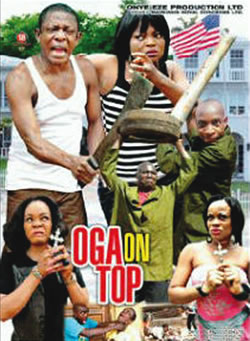 Just as a Nollywood producer cashed in on the unfortunate Aluu4 incident to make a movie ‘The Four Boys,’ another one has joined the train of opportunists who took advantage of the ‘Oga at the top’ quote to shoot a movie of same title.

The movie features popular Nollywood actor, Nkem Owoh, also known as Osuofia. Although the viral quote stopped trending on Twitter after a weeks, Nigerians put their ingenuity to test as they made T-shirts, mugs, songs and jokes about the Lagos State Commandant of the Nigerian Security and Civil Defence Corps, Obafaiye Shem, who made the now famous statement during an interview on Channels Televison.