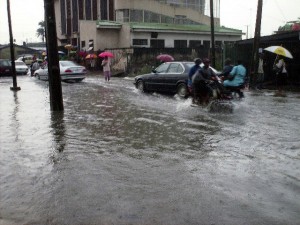 Lagos State Commissioner for Environment, Mr Tunji Bello has said that the state is expecting 249 to 275 days of rains this year.

Speaking at a media briefing to mark the second year of Governor Babatunde Fashola’s second term in office on Friday, Bello said the rains will not cease until 17 December.

“In order to improve on de-flooding the state, the ministry has employed over 7,800 people in its ongoing construction and dredging works across the state.

“The ministry is constructing and dredging 37 drainage channels with a construction strategy geared towards facilitating free flow of water. The construction and dredging translate to a total length of 40.82 km and cut across 13 local government areas and local council development areas in the state,” Bello said.

He therefore appealed to residents of the state to clear their drains, and said that the ministry was committed to the maintenance of the existing drainage channels across the state and the construction of more.

“Government’s determination to deflood the state is every Lagosian’s responsibility and as such all hands should be on deck in order to record a huge success this year,” he said.

The commissioner attributed the non-availability of LAWMA bins at some major points in the state to insecurity and the non-compliance attitude of the people.

“It will surprise you to know that some people do not pay their LAWMA levies and it is a general problem. We must all put in a conscious effort to have a clean environment,” he said.

Bello appealed to the residents to complement the ministry’s efforts by having a change of attitude by disposing their refuse properly.