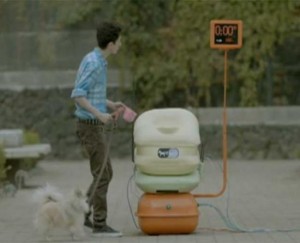 Stepping in dog poo might bring good luck in some cultures, but most people agree it’s one of the worst things that could happen as they walk through the city. Owners not picking up their pets’ droppings is a global problem, but a Mexican Internet portal has come up with an invention that might just inspire people to do the right thing. It’s called Poo Wifi and it’s pure genius.

Walking through the park trying to avoid every dog poo that comes in your way is an almost impossible task, but it wouldn’t be a problem if owners would just clean up after their pets. So Internet portal Terra has teamed up with ad agency DDB to create something that would motivate people to actually pick up their dogs turds.

After some brainstorming, they came up with Poo Wifi, a machine that offers a free wifi connection in exchange for dog poo. So after they’ve picked up the droppings, people can drop the bags in a special box on top of the machine, after which the machine offers a number of minutes of free wifi, depending on the weight of the poo. Obviously, large dog owners will get more free wifi, which makes sense since their dogs’ droppings are the messiest.

You’re probably thinking Poo Wifi will never work, because people will just throw rocks or whatnot into the machine, tricking it to get a few minutes of free wifi. I don’t doubt some people would resort to this, but luckily each Poo Wifi machine comes with a hostess that hands out plastic bags to pet owners, and also keeps an eye on what goes in the machine box. They do allow bags of trash though, because any kind of junk that goes into Poo Wifi means the people can enjoy a cleaner park.