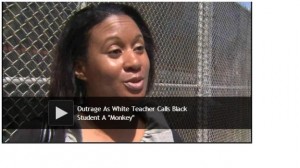 A teacher at JHS 234 in Brooklyn is under fire for allegedly asking a black student if she was a “monkey.”

PIX11 reports Deborah Perkins was alarmed to receive a phone call from her 12-year-old daughter in which the young girl described her teacher’s attempts to stop her and other students from talking while the morning announcements were taking place.

Perkins said, “She told me, ‘My teacher called me and asked me if I was a monkey.’ She was, humiliated.”

The Department of Education said the incident is under investigation.

On Friday, a high school English teacher in Albany was put on leave after giving his students a persuasive writing assignment, in which they had to argue that “Jews are evil.”