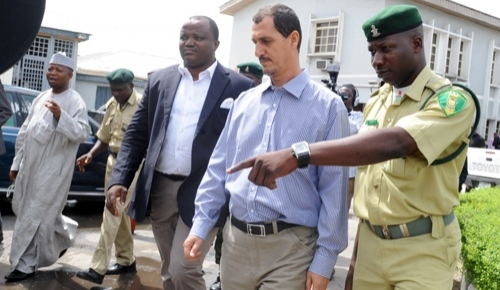 A Federal High Court in Lagos Monday sentenced an Iranian national, Azim Aghajani, and his Nigerian counterpart, Ali Jega, to 17 years imprisonment each for their role in the importation of large cache of firearms into Nigeria.

Justice Okechukwu Okeke while delivering his judgment, held that he was not in doubt that the 13 containers loaded with arms were shipped into the country, contrary to the claim by the accused persons that the containers contained building materials meant for construction in Banjul, the capital of The Gambia.

The judge also declared that the Federal Government through its lawyer was able to tender before the court email correspondences on the transactions between the convicts.

According to him, “It is my opinion that the moment the security started closing in, the story started changing.

“I sympathise with the second accused person because of the role he played because he thought he was helping his friend.

“There is no doubt that the accused persons and their collaborators deal in the unlawful importation of arms.”

The court however ruled that the jail terms would run concurrently from February 1, 2011 when they were first arraigned.

Also, the container load of firearms was directed to be forfeited to the Federal Government of Nigeria.