Graves of a Catholic woman and her Protestant husband, who were not allowed to be buried together. In the Protestant part of this cemetery, J.W.C van Gorcum, colonel of the Dutch Cavalry and militia commissioner in Limburg, is buried. His wife, lady J.C.P.H van Aefferden, is buried in the Catholic part. They were married in 1842, the lady was 22 and the colonel was 33, but he was a protestant and didn’t belong to the nobility.

This caused quite a commotion in Roermond. After being married for 38 years, the colonel died in 1880 and was buried in the protestant part of the cemetery against the wall. His wife died in 1888 and had decided not to be buried in the family tomb but on the other side of the wall, which was the closest she could get to her husband. Two clasped hands connect the graves across the wall 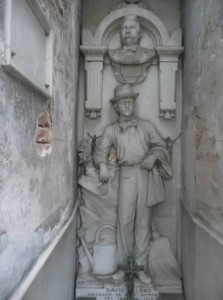 The Recoleta Cemetery is most famous for being the burial ground of Eva Duarte de Peron “Evita,” but it actually holds many famous military leaders, presidents, scientists, poets and other important or wealthy Argentineans.

David Alleno was an Italian immigrant who dreamed of being buried in the prestigious cemetery where he worked as a caretaker from 1881 to 1910. He saved enough money to buy a space and built his own tomb. He even traveled back to his home country to find an artist who could carve his own figure in marble, complete with keys, broom & watering can. Legend says that after the tomb was finished David took his own life inside his grave, but many reputable sources say he died years after the tomb was constructed. 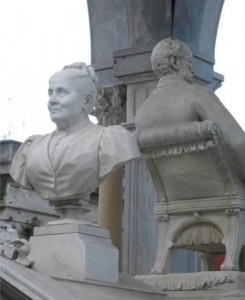 This headstone is also located at the Recoleta Cemetery in Argentina. What’s unusual about it? Well, a man sitting on his sofa looking seriously at the horizon while a woman is seated in another one, at his back, but they are looking in opposite directions. They are placed like that because he died first, so the family made his Mausoleum. Some years later, when his wife died, in her testament she asked to be placed that way so as to represent their marriage: they spent their last 30 years without speaking a word. 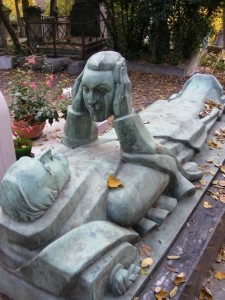 Fernand Arbelot was a musician and actor who died in 1990 and was buried in the Pere Lachaise cemetery. He wished to gaze at the face of his wife for eternity. 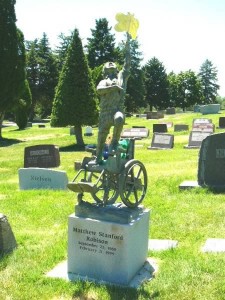 This unique monument shows a young boy jumping upward, out of his wheelchair. Confined to the chair most of his young life, he is now free of earthly burdens. 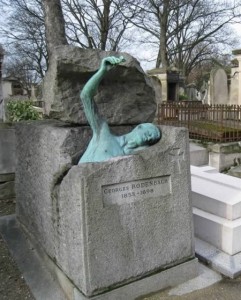 Père Lachaise cemetery in Paris is possibly the most visited graveyard in the world, and it’s known as much for the beauty of its monuments as for the celebrity of its occupants. However, arguably the most dramatic tomb belongs to an author most people have never heard of.

Georges Rodenbach was a 19th century Belgian writer, best known for a book pretty much relegated to serious literary students. Bruges-la-Morte, a symbolic novel published in 1892, was about a man mourning his dead wife. So, it’s painfully poignant that Rodenbach’s tomb depicts a patina bronze likeness of himself actually emerging from the grave, with a rose in one hand.