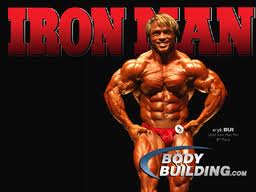 Two grandfathers in their sixties competed recently in the Oregon Ironman bodybuilding competition held at the Chinook Winds Casino in Lincoln City. Mike Huard and Felton Campbell were the oldest musclemen joining 242 other competitors at the show. The men are friends and both have careers in fitness. Huard is 62 and owns a supplement store and at 61-years-old, Campbell is a personal trainer.

Huard told KVAL 13 he believes their ages are actually assets when competing, “Here’s where it works to our advantage – it’s because we’re mature, we’ve been through all the testosterone spurts, we’re having fun and it’s keeping us really healthy.” Campbell said, “You’re never too old,” confidently adding, “Right now, me and Mike’s goal is to beat somebody in their 40’s which will happen this year.” At the end of the Oregon Ironman, Campbell beat Huard in the Masters over 60 category.

The two bodybuilding grandpas may seem fit candidates for a Guinness World Record in the oldest bodybuilder category, but they’ll have to keep pumping iron to earn it. Currently the title is held by 83-year-old Raymond Moon of Australia. Moon recently took to the stage at the World Fitness Federation International Championship in Melbourne.