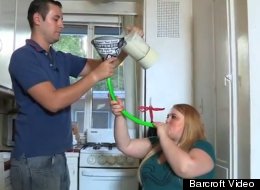 Some women are trying to lose weight as the summer draws near, but Tammy Jung is trying to pack on the pounds, nearly 200 more.

Jung, 23, currently weighs 231 pounds, and doesn’t plan to stop force feeding herself until she reaches her goal weight of 420.

There’s a method behind her masticating.

The aspiring Los Angeles fetish model wants to become an Internet sex symbol for men who like large women. She is selling memberships to her adult website, sexysignaturebbw.com, where she shows off her ample frame in teeny bikinis.

But beauty has its price. For Jung that means spending her days stuffing herself with fried chicken, donuts and whole blocks of cheese, according to the Mirror.

Sometimes, her boyfriend, Johan Ubermen, 28, helps her out by pouring milkshakes down her throat using a beer bong-like device.

Jung averages 5,000 calories a day — a hefty load, indeed — but she hopes to earn $3,100 a month once she reaches her goal weight, Cosmopolitan.com reported. She says she can spend up to $108 a day on food.

“I start the day with a huge breakfast of waffles, cream cheese, bacon and sausage then head to McDonalds for a few burgers in the afternoon,” she said, according to HuffPost UK. “I can snack on cheese all day, a couple of blocks is no problem, then for dinner I’ll either eat pizzas or make Mexican food.

“At the end of the day, I make a weight-gain shake from heavy whip cream and a whole tub of ice cream, which Johan feeds me through a funnel. The funnel forces me to drink the shake even when I’m full after a day of eating.”

She is averaging 49 pounds every six months, but said she’s never been happier.

“I’ve never been happier than I am working to put on weight, nothing will stop me achieving my dream,” she said, according to the Daily Mail.

“I know it’s controversial but it’s no one else’s business — eating makes me happy. I’m making lots of money doing what I love – and I want to make even more. As far as I’m concerned there is no such thing as too big.”

In the world of supersized sex symbols, Jung is just small potatoes (albeit potatoes covered with butter, bacon and sour cream), compared to the larger luminaries.

The biggest star in “the feeder community” is Susanne Eman, a woman in Casa Grande, Ariz., who is attempting to eat her way to the Guinness World Records book for heaviest woman ever.

Eman told Inside Edition last year that she topped the scales at over 800 pounds — though that weight has never been Guinness certified. She ultimately hopes to reach the 1,200-pound mark previously held by Rosalie Bradford, who died in 2006.

Guinness currently recognizes Pauline Potter, of Sacramento, Calif., as the heaviest woman in the world.

She was awarded the coveted honor in 2011 when she weighed 643 pounds, but recently lost 98 pounds by having lots and lots of sex with her ex-husband, Alex.

The woman who stands largest among “feeder” sex symbols is Donna Simpson, who set and holds the Guinness World Record for heaviest woman to give birth when she delivered her daughter, Jacqueline, in February 2007, while weighing a whopping 532 pounds.

Simpson told HuffPost she weighed 630 pounds at her peak, although media reports listed her as 100 pounds heavier. She holds the record for “heaviest mom,” but has never been certified as “heaviest woman alive.”

However, thanks to a large media presence, Simpson is perhaps the most well-known “gainer” and once earned a living by charging fans $19 a month to watch her eat.

She shut down her pay-per-view eating site a few months later.

Since then, Simpson has blogged for HuffPost about her attempts at changing her life and, in one memorable post, explained how crack cocaine was, for her, an ineffective weight-loss tool.