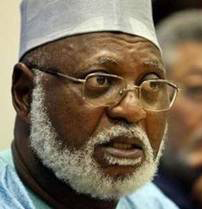 Former Military Head of State, General Abdulsalami Abubakar has called on Nigerians to pray for members of the Boko Haram sect to have a change of heart in order to put an end to their bloody campaign of violence.

The retired General in a statement expressed sadness despite repeated calls from well-meaning Nigerians, the sect has refused to listen to the voice of reasoning.

In his words “I implore Nigerians to pray for those people who on their own decided to take to violence as a means of achieving whatever their aim is  so that they can have a change of heart, come to the table, discuss peace and discuss their grievances”.

“In the name of their conscience, in the name of Allah which they claim they profess they should lay down their arms and embrace dialogue to end the circle of violence”.

The Nigerian military is currently involved in a major offensive against the sect in three north-east states considered to be their strongholds.

The Federal Government has also proscribed the activities of the sect thereby sending a strong signal that it is no longer business as usual for the insurgents.

General Abubakar further decried the “senseless killing” by the extremists which has turned a lot of children into orphans adding that the situation should not be allowed to continue.