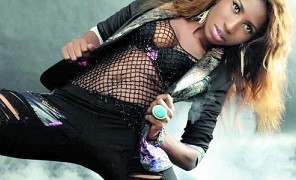 Famous Nigerian singer, Dona Diva, a native of Delta state was recently interviewed by The Entertainer.


She had a lot to say and she also opened up on some prívate stuffs.

Who is Dona Diva?

My real name is Dona Adjah and my stage name is Dona Diva. I’m from the Urhobo speaking part of Delta State. I am into music and fashion.

How would you describe your experience as a singer?

It’s a bitter-sweet experience but I have chosen the sweet part of it. In everything you do, there are bound to be ups and downs. I combine fashion and music together and it’s quite exciting because I appear on stage with my own hand made costumes and people are like, ‘nice dress’ even before I start performing. It’s not really been easy but I’m having fun.

Tell us about the single you have on air?

The single I initially dropped was Shut Up. I did it because of people who tried to run me down. I am saying Shut Up to these negative people because I know you can achieve anything as long as you believe in your dreams, in yourself and in God.  The new single is New Gaga; I am dropping its video any time soon. It’s all about music and dance. The message is, just enjoy the music, feel the rhythm and let go off your sorrows.

Could we say you’re not married because you’re distracted by the loads of rich guys hanging around you? Do you believe in love?

Love does exist. I don’t know whether it is true love but it does exist. But the fact that I mingle with rich boys doesn’t mean I wouldn’t know who to choose when the time comes. I can’t replace love with material things or riches.

Isn’t your boyfriend scared you might dump him for a richer guy?

I don’t know how he feels but he supports my career.

Yes, sometimes I see it in him but he supports me.

Have you ever had a crush on any of your fans before?

Yes, I was having this crush on a guy (laughs) but I found out he’s married so I had to let go.

What was it like the first time you had séx?

You say wetin? (laughter) It was a lot of crying because it was painful. The same thing I think for every girl.

What was it like performing for Obasanjo and Jonathan?

I performed with Sugar Band at Obasanjo’s birthday and I was excited. I also performed for President Jonathan. I saw him smiling as he watched me. I felt so special that my president appreciates what I am doing; it was a great experience for me.