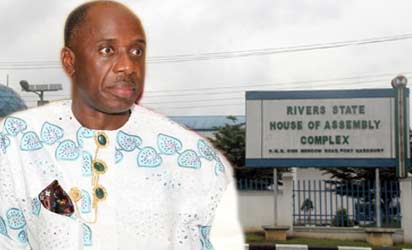 The Rivers State Government has insisted that the presence of Governor Rotimi Amaechi at the state House of Assembly last week Tuesday, when lawmakers engaged in fisticuffs salvaged the situation from deteriorating any further.

The state government’s position follows a comment credited to Special Adviser to the President on Political Matters; Ahmed Gulak that Governor Amaechi should be thoroughly investigated by the security agencies and prosecuted after his tenure must have ended.

According to Gulak, “Security agencies should investigate the matter (fracas) thoroughly and keep the file because I still find it amazing and tragic for the governor to go into the House of Assembly to play active role in the fracas. It amazes me”.

But the Chief of Staff, Rivers State Government House, Port Harcourt, Mr. Tony Okocha in his reaction, argued that rather than the presidential aide calling for a probe of Amaechi’s role in the saga, he should have called for an inquiry into how thugs gained entrance into the House in the first place.

Mr. Okocha said, “It is most unreasonable to contemplate; rather conversely, Amaechi ought to be commended for his brave intervention and rescue mission even at the risk of his life. Gulak should be suggesting an inquiry into how armed thugs got into the Assembly and at whose behest.

“He (Gulak) should be able to absolve the Presidency from complicity knowing the relationship between   Bipi and the Presidency. Nigerians are better aware than he thinks,” Okocha added.