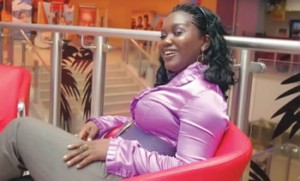 Her name is Bunmi Jedidiah Nelson, a Nollywood actress currently making waves in the industry. After successfully hosting a TV programme, Youths 2 Youths, Nelson moved into Nollywood in 2000 and has continued to dazzle movie lovers with her unique acting skills.

Though popularly known by her fans as ‘Oko Oloko’ or ‘Nike Atawewe’, sobriquets she got from roles she played in both movies, Nelson, who prefers the nickname, Sexychoco, reveals that she was destined to be an actress. “Right from my childhood days, I have always had flair for acting,” she says.

When she got the opportunity to act in her very first movie entitled Silver Lining, the experience on location further increased her passion for her chosen career. Nelson is a very creative producer that is also sought after in the Yoruba genre of the movie industry. In this interview, she talks about her other creative endeavours, career and why she loves kissing.

You started with ‘Silver Lining,’ an English movie, but you now feature more in Yoruba movies, why?

I wouldn’t say I feature more in Yoruba movies more because I act in both. Even, I still get calls from my producers in Asaba. I will say I do both very well and professionally, hence, the regular calls from producers.

Tell us about your first movie and location experience.

I got loads of fun from featuring in my first movie. Initially I didn’t envisage that my senior colleagues on the set would easily accept me. I was pleasantly surprised that they were even more friendly and supportive on set. Some of the professionals were Gloria Young, Omotola Jalade-Ekeinde, Robert Peters, Sound Sultan and Ricardo Agbo, among others. I was really elated to be on the same set with them and I told myself to brace up and go for it! I have not looked back ever since.

How many movies have you done so far? Please, mention some of them.

I have done many movies. I have even lost count. I have featured in movies like When the Going Gets Tough, Undesirable, Standing Order, Enemies in Love, Images in the Mirror, A Cry for Husband, Dating Game, Royal Engagement, 100 days in the jungle, among others. For the Yoruba movies I have done Abeere Oloore, Ile-Alayo, Ojukoju, Ajenipa,Street girls, Orin-Dola, Emi-Keji, Oju-Oro, Ife Ni, Serekode, Oko-Owo, Oko- Oloko, Onisiata, Borokinni, Orule, Tashere, Komfo, among others. I have also produced two Yoruba movies – Oko Oloko and Onisiata.

Which was the most challenging and why?

I would say Oko Oloko was the most challenging and it was well-accepted. Some people hated me after the movie came out because of the very challenging role I played as a husband snatcher, doing fetish things and displaying some wicked traits and being domineering.

Are you saying that people reacted negatively to you because of the movie?

Oh yes. I often get embarrassed when I’m in public places, events or parties. From nowhere someone will jump on me and shout, ‘Oko Oloko’ or ‘Nike Atawewe.’ Those were characters I played in two movies. While some others will commend me for the role and appreciate how I acted it and made it very real and believable. Some people also think I’m like that in real life because I acted the role professionally.

Now, who are you off-screen?

What are you doing presently?

What exactly is the programme about?

It’s a talk show on our crossover artistes in Nollywood. It also promotes culture and tourism. We would be talking about our rich cultural heritage, values, traditions and religion in Nigeria.

Aside producing movies and acting, what else do you do?

I am a fashion designer and I own House of Euphoria. I make beads, sketch and design clothes.

How do you combine all of these creative endeavours?

It’s no big deal to me. It’s my talent. They are all under one umbrella, because I also design for people in the industry. When I am not shooting, I sit to do beadwork and design clothes. I’m a brain on two legs.

Now let’s talk about your private life – are you married, hooked or single and searching?

I’m still single. I will walk down the aisle when God says its time!

Is it that you are not in any relationship?

I will answer you this way: I am waiting for my knight in shinning armour to come and whisk me away exactly when God says it is time.

What kind of man would you love to marry?

My kind of man should be caring, loving, accommodating, gentle with great sense of humour, neat, loves God and a good kisser.

This kiss thing again, why do you love kissing?

Why do people love food, football, dancing, travelling? I love kissing the same way several people love doing stuffs too. It is inexplicable I guess.

How often do you kiss in a week?

What about the men you kiss in movies?

Well, I have in few movies. In any case, they are fake kisses.

I hear you. I also noticed a tattoo on your cleavage. How many tattoos do you have on your body?

I have tattoos and they symbolise love because I’m a romantic person.

Why do you love tattoos?

I love the art of making tattoos.

What part of your body do you cherish the most?

Every part of my body, especially my eyes, lips and boobs.

What role can’t you play in a movie?

I can’t play nude roles except for a body-double.

How romantic are you?

I am extremely romantic. It’s inexplicable. It is a good and sweet feeling, that’s all.

What turns you on and off?

I get turned off by liars, fake people and pretenders.

What turns you on?

I get turned on by just knowing how much lies in the vault of the World Bank.

How do you ward off men who want to date you and you don’t want them?

I can’t bite more than I can chew. I simply make them my friends or turn them down politely.

Tell me one nasty experience that you are unlikely to forget soon.

It was a funny one. It was when I didn’t insert my tampon properly and it fell off right there on the road. I felt the ground would just open and swallow me up. I couldn’t stand the shame. Please, don’t ask me how it fell.

Tell us about your family and academic background?

I’m the sixth child of my parents’ nine children. I grew up in Ajao Estate, Lagos. I had my primary and secondary education there before proceeding to Kwara State Polytechnic and later to Lagos State University to study Theatre Arts. I also studied at the Nigerian French Language Village, Badagry where I learnt to speak French. My parents and siblings live abroad.

Have you acted in any French movie?

No, but I will soon shoot a French love story. In addition, I still intend to further my education and study filming at the popular New York Film Academy.

Which state are you from and do you have any preference marrying from your tribe alone?

I’m from Kogi State. I don’t have any preference in marriage. God created all of us
Vanguard