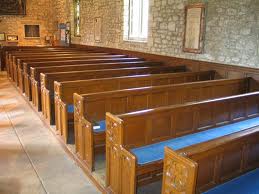 Wayne Dodge, 51, was arrested Sunday following a violent row at a Mormon church that reportedly started over seat-saving.

According to Deseret News, Dodge, a regular at the Meadows Ward LDS Church in Plain City, Utah, sat in a section of pews being reserved by a family who does not usually attend the ward.

“There [were] some seats that were allegedly saved, and there was a disagreement over whether they were saved or not… This continued to escalate throughout the day,” Weber County Sheriff Lt. Mark Lowther told FOX affiliate KSTU.

Police said the argument spilled out into the church’s parking lot and became physical. Punches were thrown, and after one man returned from cleaning himself up, Dodge allegedly struck him with his car, according to Deseret News.

Brett Ferrin, bishop of Meadows Ward told KSTU that about 400 people were gathered for a missionary farewell and a baby blessing. Many of the faces in the crowd were unfamiliar as a result. So much for loving thy neighbor.

Ferrin called the incident a “teaching moment”; Dodge might learn the hard way that lame as it is to save seats, it’s not worth felony aggravated assault charges. If convicted, Dodge could face up to five years in prison and a $5,000 fine, according to the Utah State Courts website.