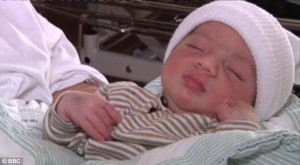 There are plenty of hazards you are taught to avoid to stay safe while driving a car… but a woman giving birth in the passenger seat next to you is not one of them. This is the exact quandary Mokhles Raheema faced as he drove his pregnant wife and two young children to hospital along a motorway in Sweden.
As Samaher Mezban suddenly began to give birth, Mokhles took his eyes off the road to check she and the baby were OK – only to veer into a ditch and roll the vehicle four times.  Miraculously, not only did he, his wife and their two children survive, so too did their newborn daughter who they found lodged under the front passenger seat, her umbilical cord still attached.

‘She told me, “she’s coming out, she’s coming out!” ‘ Mr Raheema told Swedish television on Monday. ‘[Then] I saw my daughter come out and fall headfirst onto the floor of the car.’

He said Samaher was in the passenger seat as they rushed to hospital in the eastern city of Gavle when she went into labour with the couple’s third child. The other two, aged one and eight, were on the back seat. Unable to hold the baby in any longer, brave Samaher was forced to deliver the little girl herself as Mokhles tried to keep a steady hand on the wheel.
But, worried about his wife and new daughter’s safety, he looked over before crashing the car. When the car came to a rest, Mokhles again looked over to find his wife beside him and his first two children conscious in their seats but the baby was nowhere to be seen.
After a frantic search, he finally found it tucked under the front seat. ‘I fetched her and held her against me,’ he said, adding, unsurprisingly that she was crying. An ambulance soon arrived, having been called by a passing motorist and took the family to hospital.
Samaher added: ‘I feel better. But I still hurt all over.’

Mokhles, however, may have some explaining to do, admitting he was sorry that he totalled the car which he had borrowed from a friend.