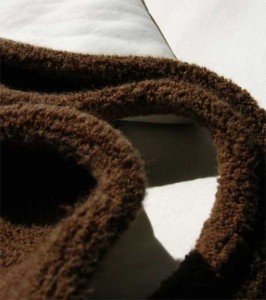 Baz Brown, who is based in Queensland’s Gold Coast, says his patented invention will allow holiday-makers to “leave the beach at the beach.”

Explaining how the product works, he said: “Unlike regular beach towel where sand can get trapped in the loopy fibres, the Sandusa’s smooth nylon backing allows sand to slip off easily, leaving it dry and sand free.”

The underside of the towel is described as waterproof, meaning sand should not seep through if the towel gets wet. The front side is made of a more recognisable towelling material.

“If you throw sand on the Sandusa it is going to get covered in sand,” it says on the FAQs section of the website. “The towelling side is just like a normal towel so if you get sand on that side and stomp all over it, it will remain sandy like a regular towel would.”

Mr Brown is seeking to raise money to market and manufacture the product through a crowd funding campaign on the indiegogo website, in which supporters pledge financial support mostly in return for varying quantities of the product once it is made.

The estimated delivery date for the beach towel is December this year.

A similar strategy was used to raise money for the so-called “ostrich” pillow, a portable device that inventors said would “enable power naps anytime, anywhere,” including in airport lounges and on planes.