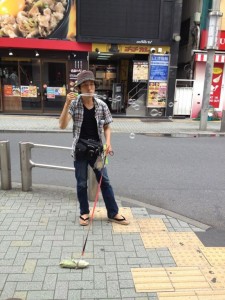 It’s not every day you get to see people dragging vegetables on a leash in the street. Unless you live in Japan, that is. Over the last year, photos of a well-dressed man walking all kinds of produce through Tokyo like they were pets have been surfacing on various social networks. Known as “Cornman”, he has become one of the human attractions of Japan’s capital city.

Until recently, no one really knew who Cornman was or why he was walking produce on a leash. The first known photo of him dragging an ear of corn outside a subway station was tweeted in May of 2012, and ever since then people started sharing pics of the elusive character with all kinds of produce, from cauliflower to radishes. There was a lot of speculation surrounding Cornman and the motives of his bizarre habit. Some people said he was crazy, others that he was just looking for attention, and there were those who claimed he was the loser of a batsu game (a competition or a bet where the loser has to do something embarrassing), but no one knew for sure. Then, a few days ago, Cornman appeared on a Japanese TV show and talked about himself and his produce pets.

Cornman, real name Masahiko Naganuma, says he was inspired to walk corn and vegetables on a leash through Tokyo’s Kanto area after seeing a foreigner dragging a Chinese cabbage in his hometown of Tokorozawa in 2006. For some reason, the image of a person walking a vegetable made a big impact on him so he went home to get his own edible pet and returned to meet the stranger. Unfortunately he was gone, and Naganuma never saw him again, but the habit stuck with him, and he began walking his produce on a regular basis. Although Cornman never got to meet his inspiration, I have a feeling it might have been Han Bing, the famous Chinese artist who during the last decade traveled around the world shooting his “Walking the Cabbage” photo series.

Contrary to his name, Cornman doesn’t walk just corn ears. He has been spotted dragging along all kinds of produce (radishes, carrots, cauliflower, leeks, etc.) and says walking broccoli gives him the strangest feeling, for some reason. Just like he would a real pet, Masahike names all his vegetables, either by changing their Japanese names (e.g. his corn is named Tomomi, after the Japanese name “toumorokoshi”) or by adopting character names from his favorite anime like Dragon Ball Z (his carrot is called Kakarrot). But he does something no pet owner would ever do. He eventually cooks and eats all his pet produce, and says the bond that develops between them after the walks makes them taste even more delicious.

Masahiko Naganuma claims that when he’s out walking his produce police stop him up to four times a day, but that it’s not enough to stop him from doing what he loves. So if you’re ever in Tokyo and see a guy dragging an ear of corn on a leash, don’t panic. Just do what everyone else does, smile and take a picture.