A woman who claims that she was sexually abused by a police officer in Island Park, New York, has filed a federal lawsuit against him and his partner. 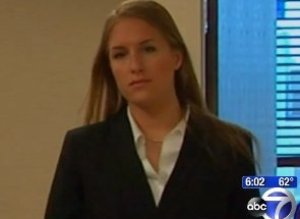 In 2011, officers Rachel Miller and Gary Zima arrested Jenny Hannigan, 27, on suspicion of driving while intoxicated. They handcuffed Hannigan and put her in the back of a squad car, and Zima got in the back seat with her. Hannigan claims that Zima put his hand up her dress while Miller drove back to the station.

“He was close to my body and reached over at some point during the ride … and put his fingers inside of me,” Hannigan said in a news conference Monday, according to the New York Daily News. “I never thought something like this would happen when I was in the custody of the police, whom I have always trusted.”

She accuses Miller of doing nothing to help her.

“I was visibly trying to make eye contact with her and felt like she was purposefully not paying attention to what was going on in the back seat,” Hannigan said.

The suit also claims that Zima texted Hannigan two days after the alleged sex crime to ask how she was doing, to which she did not reply. According to WABC, Nassau Police acknowledged that Zima obtained Hannigan’s cell phone number by accessing her records.

Hannigan reported the alleged abuse to the Nassau County Police Internal Affairs following the incident, but they found the allegation to be “undetermined.” Zima still with the department, according to WABC.

The suit seeks $150,000 in damages for excessive force as well as violations of Hannigan’s Fourth and Fourteenth Amendment rights, according to the Long Island Press.

“It’s criminal conduct and yet these officers are not being brought up on charges,” Hannigan’s attorney, Amy Marion said Monday, according to the newspaper.