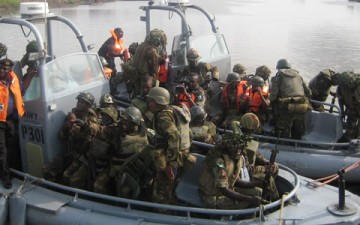 The Joint Task Force (JTF) in the Niger Delta, Operation Pulo Shield said on Sunday that it had dismantled a militant camp in the Bakassi Local Government Area of Cross River.

A statement by the Media Coordinator of the JTF, Lt.-Col. Onyema Nwachukwu, in Yenagoa, said that various arms were recovered from the camp.

“Other items recovered from the camp include four machine gun belts and one passport fibre boat, belonging to the Inland Water Ways Agency,” JTF stated.

According to Nwachukwu, the camp known in local parlance as ‘Efut Esighi Militant Camp, served as operational base for pirates and militants from where they attacked their victims.

The troops also impounded four metal barges and a speed boat caught engaging in illegal oil bunkering activities in the operation which took place between Nov. 11 and Nov. 22.