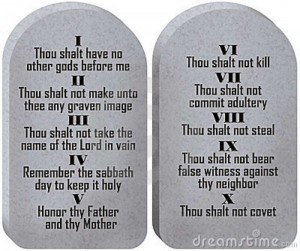 A man and a woman were arrested for battery following a fight over the Bible and the Ten Commandments, Georgia police said.

The fight occurred at 1 a.m. Saturday morning in a hotel room in Cartersville.

When the police officer entered the motel room, he saw blood on the carpet and a bloody towel in the sink, the police report states.

Carolyn Unfricht, one of the detainees, told the officer that the conversation had become tense, and that she used a Bible to hit Daniel Camarda across the face, the Atlanta Journal-Constitution reported.

Camarda then allegedly slung Unfricht across the room, and she suffered a cut to her head and an injury to her foot.

Both individuals were highly intoxicated, were slurring their speech and had difficulty walking, police said.

The pair has been booked in the Bartow County Jail, the Journal-Constitution said.