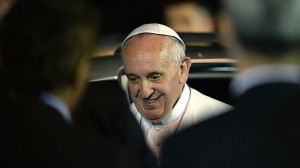 Pope Francis has identified peaceful co-existence as the only solution to the crisis in some parts of Nigeria.

In his message at the celebration of the World Day of Peace, which is an annual event of Catholic faithful worldwide, the Pope noted that with the use of brotherly love, many of the country’s problems will be solved.

The Pope’s message was read by the Archbishop, Catholic Archdiocese of Lagos, Most Rev Adewale Martins, at the Holy Cross Catholic Church, Lagos.

“It is easy to realise that fraternity is the foundation and pathway of peace. When we have the value of fraternity, a feeling of brotherhood, love and care for one another, many of our problems would not be there.

“What is to be done is to get back to the roots to identify ourselves and recognise and deal with ourselves as brothers and sisters that we are. It will go a long way to bring peace back into the world,” he said.

He attributed the situation to the inability of genuine relationships among the people and lack of solid family and community relationships.

“We are concerned by the various types of hardship, marginalisation, isolation and various forms of pathological dependencies which are currently on the increase.

“This kind of problems can be overcome only through the rediscovery and valuing of fraternal relationships in the heart of families and communities.

“Also in the sharing of joys and sorrows of the hardships and triumphs that are a part of human life,” he said.

In his own New Year message, the Catholic Archbishop of Abuja, Cardinal John Onaiyekan, also charged Nigerian politicians to be mindful of their choice of words to avoid overheating the polity.

According to him, the use of words like “capture” in the political lexicon, would in no small measure contribute to over-heating the polity

Onaiyekan gave the charge when he fielded questions from newsmen yesterday after the New Year Service at the Our Lady Queen of Nigeria Pro-Cathedral in Abuja.

He said 2014 was crucial, noting that in view of the chaotic political terrain already being experienced in the country, it might not be a smooth sail politically.

Onaiyekan noted that “the Pope’s message is directed to the whole world and it’s the job of the local church to review it and see; what does it say to my country?

“My job is not finished by simply illustrating, I will have to carry it incessantly throughout this year. 2014 is crucial; there are lots of political campaigns and it’s not going to be smooth this year.

“It’s already getting very complex almost chaotic but sometimes we don’t have to worry about the complexity that we see because in my own opinion, it all depends on the present process when people begin to create alliances, we don’t know what they are doing.

“The major message we should be able to pass to our people is that politics is supposed to be a decent game of confrontation of ideals, where people find out who is in the best position to move this nation forward. It is not a battle; it’s not a do-or-die affair.

“Words like ‘capturing’ should never be used in politics but we hear it so often. Because when we talk of ‘capturing’, it means whoever loses in the game is practically defeated and kicked.

“In Nigeria if you lose an election you are finished which is why politicians who lose elections go back to the party that is presently ruling, since the ruling party seems to control everything and doesn’t allow other people to feel like they belong to the whole community.

“This has to change; if it changes then Nigeria can have decent politics not moving from one crisis to another. Let me give you an example: why is it that every time when we have an election, on the morning of the election, the whole country is brought to a standstill and the whole nation is filled with soldiers?

“Can’t we see what is happening in civilized nations? Election day is a normal day, you take off some time from your job, go and cast your vote. In Nigeria it has been turned into a battle. This has to stop and I ask myself where all these soldiers are for whom? Who are those who are causing the insecurities?” Onaiyekan stressed.

On what could be done to remedy the situation apart from prayers, he said: “We have been doing other things, we have not been praying only. It’s work and pray and heaven helps those who help themselves and even we as religious leaders we have only a little part to play in indicating the right part.”