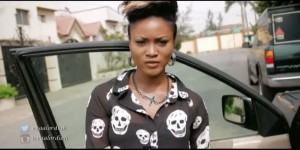 We all know these days, that one of the fastest ways to gain recognition is through controversy, everyone knows that controversy sells.

Hot lyrics spitting rapper – Eva some hours ago released a video clip on her YouTube page – spitting a 46-bar freestyle.

‘These other players don’t know sh**, they doing it wrong, what you telling me, They hiding in the shadows of the short black ones, I’m about longevity‘, Eva rhymed. Fans say this line was directed at Pryse.

She also rhymed ‘Y’all need to stop with that first lady shit, ain’t nobody got patience for that you feel me, I’m trying to get on my big boss shot, put my name on the map’. Prominent female rapper Sasha is popularly known as ‘First Lady‘. It is believed Eva threw a jab at her too.

Eva has however denied dissing anyone. On Twitter she replied a fan’s question concerning the freestyle saying ‘Pryse is my homie yo.. Never do that‘.