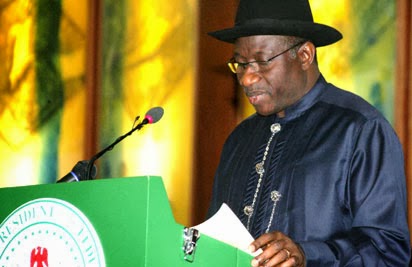 President Goodluck Jonathan on Wednesday said that the 1914 amalgamation of the Southern and Northern Protectorates to form a single country called Nigeria was not a mistake.

The president, who spoke last night, in a nationwide broadcast as Nigeria marks its centenary, maintained that there is hope, although the nation is still facing some challenges.

Full text of President Jonathan’s speech reads: “I extend warm greetings and felicitations to all Nigerians as we celebrate our nation’s centenary; a significant milestone in our journey to nationhood.

“One hundred years ago, on the 1st of January 1914, the British Colonial authorities amalgamated the Southern and Northern Protectorates, giving birth to the single geo-political entity called Nigeria which has become our home, our hope, and our heritage.

“I have often expressed the conviction that our amalgamation was not a mistake. While our union may have been inspired by considerations external to our people; I have no doubt that we are destined by God Almighty to live together as one big nation, united in diversity.

“I consider myself specially privileged to lead our country into its second century of existence. And as I speak with you today, I feel the full weight of our hundred-year history. But what I feel most is not frustration, it is not disillusionment. What I feel is great pride and great hope for a country that is bound to overcome the transient pains of the moment and eventually take its rightful place among the greatest nations on earth.

“Like every country of the world, we have had our troubles. And we still do. We have fought a civil war. We have seen civil authorities overthrown by the military. We have suffered sectarian violence. And as I speak, a part of our country is still suffering from the brutal assault of terrorists and insurgents.

“While the occasion of our centenary undoubtedly calls for celebration, it is also a moment to pause and reflect on our journey of the past one hundred years, to take stock of our past and consider the best way forward for our nation.

“Even as we celebrate our centenary, we must realise that in the context of history, our nation is still in its infancy.

“We are a nation of the future, not of the past and while we may have travelled for a century, we are not yet at our destination of greatness.

“The amalgamation of 1914 was only the first step in our national journey. Unification was followed by independence and democracy which have unleashed the enormous potential of our people and laid the foundation for our nation’s greatness.

“In challenging times, it is easy to become pessimistic and cynical. But hope, when grounded in realism, enables and inspires progress. Therefore, as we celebrate our first century of nationhood and enter a second, we must not lose sight of all that we have achieved since 1914 in terms of nation-building, development and progress.

“We must be inspired by our past to overcome the obstacles we face in the present and honour our forebears by realising the promise of a Nigeria that is not only independent but also truly unified, prosperous and admired the world over.

“The history of Nigeria since independence is the story of a struggle to fulfill our great promise. The discovery of oil in our country in the late 1950s offered new hope of prosperity but we have not always been able to reap the benefits in a fair and equitable way.

“The situation was not helped by political instability and the frequent suspension of democracy by military coups. During the civil war, the very existence of our country was cast into doubt but through it all, the promise of a Nigeria that is united, free and strong remained in our people’s hearts.

“Thanks to the efforts of our statesmen and women, and millions of ordinary Nigerians, the union endured and flourished.  I would like to specifically commend members of the Armed Forces for their contributions and sacrifices to keep Nigeria one.

“Gen. Yakubu Gowon had the wisdom and grace to declare that the civil war had seen “no victor, no vanquished” and welcomed “the dawn of national reconciliation”.

“It was in this spirit that Gen. Olusegun Obasanjo collected the instruments of surrender at the end of the war and later became the first military ruler in our country to hand over power voluntarily to a democratic government.

“While the Second Republic did not last, his fine example was later followed by Gen. Abdulsalam Abubakar who paved the way for our current democratic dispensation which has lasted longer than the previous three put together.

“As we celebrate our centenary, I believe that it is vital that we focus our thoughts on the vast potential of a unified and progressive Nigeria; and build on the relative stability of the Fourth Republic to achieve accelerated national socio-economic development.

“I also believe that the future greatness of our country is assured by the favourable tail winds of a resilient population, ecological diversity, rich natural resources and a national consciousness that rises above our differences.

“We are a unique country. We have been brought together in a union like no other by providence. Our nation has evolved from three regions to thirty six states and a Federal Capital Territory (FCT).

“We have transited from the parliamentary to a presidential system of government. We have moved our capital from the coastal city of Lagos to Abuja, at the centre of our country.

“Today, Abuja stands as a monument to our national aspiration for greater unity; it symbolises our dream of a modern nation unhinged from primordial cleavages and designed as a melting pot of our diversity.

“If, in our first century, we could build a new capital city, we can surely build a newer, stronger, more united and prosperous Nigeria in the next century that will be an authentic African success story.

“That is why I am confident that in the next 100 years, those who will celebrate Nigeria’s second centenary will do so as a united, prosperous and politically stable nation which is truly the pride and glory of Africa and the entire black race.

“The key to the fulfilment of that vision is our continued unity as a nation. Perhaps one of the most amazing stories of our political evolution in the last hundred years is that an ordinary child of ordinary parentage from a minority group has risen to occupy the highest office in our country.

“As we march into the next hundred years, it is my hope that mine will no longer be an extra-ordinary story but an accepted reality of our democracy that every Nigerian child can pursue his or her dreams no matter how tall; that every Nigerian child can aspire to any position in our country and will not be judged by the language that he speaks or by how he worships God; not by gender nor by class; but by his abilities and the power of his dreams.

“I am proud and privileged to have been elected leader of Nigeria and I consider it my solemn responsibility to act in the best interest of the nation at all times.

“Dear compatriots, in line with the thoughts of that great son of our continent, Nelson Mandela, let us not judge ourselves, and let not the world judge us by how many times we have stumbled, but by how strongly we have risen every single time that we have faltered.

“Even as we remain resolute in our conviction that our union is non-negotiable, we must never be afraid to embrace dialogue and strengthen the basis of this most cherished union. A strong nation is not that which shies away from those difficult questions of its existence, but that which confronts such questions, and together provides answers to them in a way that guarantees fairness, justice and equity for all stakeholders.

“My call for the national conference in this first year of our second century is to provide the platform to confront our challenges. I am confident that we shall rise from this conference with renewed courage and confidence to march through the next century and beyond, to overcome all obstacles on the path to the fulfilment of our globally acknowledged potential for greatness.

“I have referred to national leaders who did so much to build our nation in the past hundred years but nation-building is not just a matter for great leaders and elite alone.

“All Nigerians must be involved in this national endeavour. From the threads of our regional, ethnic and religious diversities we must continuously weave a vibrant collage of values that strengthen the Nigerian spirit.

“The coming national conference should not be about a few, privileged persons dictating the terms of debate but an opportunity for all Nigerians to take part in a comprehensive dialogue to further strengthen our union.

“I am hopeful that the conference will not result in parochial bargaining between competing regions, ethnic, religious and other interest groups but in an objective dialogue about the way forward for our nation and how to ensure a more harmonious balance among our three tiers of government.

“My dear compatriots, as we celebrate our centenary, the security situation in some of our North-Eastern States sadly remains a major concern for us. Just yesterday, young students, full of hopes and dreams for a great future were callously murdered as they slept in their college dormitories in Yobe State. I am deeply saddened by their deaths and that of other Nigerians at the hands of terrorists. Our hearts go out to their parents and relatives, colleagues and school authorities.

“That is why our counter-terrorism strategy is not just about enforcing law and order as we have equipped our security forces to do. It also involves expanding economic opportunities, social inclusion, education and other measures that will help restore normalcy not just in the short term, but permanently.

“I want to reassure Nigerians that terrorism, strife and insecurity in any part of Nigeria are abhorrent and unacceptable to us. I urge leaders throughout Nigeria to ensure that ethnicity and religion are not allowed to become political issues.

“I hope and pray that one hundred years from now, Nigerians will look back on another century of achievements during which our union was strengthened, our independence was enhanced, our democracy was entrenched and our example was followed by leaders of other nations whose ambition is to emulate the success of Nigeria; a country that met its difficulties head-on and fulfilled its promise.

“Finally, Dear Compatriots, as we enter a second century in the life of our nation, let us rededicate ourselves to doing more to empower the youths of our country. Our common heritage and future prosperity are best protected and guaranteed by them. We must commit our full energies and resources to empowering them to achieve our collective vision of greatness in this second century of our nationhood.

“That is the task before our country; that is the cause I have chosen to champion and I believe we will triumph”.