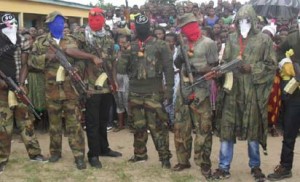 Delta State Police Command has arrested a member of the notorious kidnap gang led by Kelvin Oniarah, who had implicated a lawyer, adding “although he has not given the name of the lawyer, but in course of our investigation, if the lawyer is found to be culpable, we (police) will have him arrested.”

In a statement in Asaba, yesterday, the police said that the arrested gang member, whose name was given as Enueme Ogaga, “gave up other members of the gang in possession of their arms and operational vehicles, including a lawyer, who is on their payroll for legal services.

“The suspect is helping the police in investigation while efforts are on to arrest the other members of the gang and recover their arms.”

It will be recalled that the gang kingpin, Kelvin, who hails from Kokori in Ethiope East Local Government Area of the state, was nabbed in September last year in an undisclosed hotel in Port Harcourt, Rivers State, along with five other members of the gang by a combined team of Army and Department of State Services, DSS, operatives.

“The suspect has confessed that he is a strong and loyal member of the notorious kidnap gang headed by the arrested kidnap kingpin, Kelvin Oniarah, which was a terror to Delta State and neighbouring states.

“He has equally made startling revelations about their criminal escapades, which include the kidnap of the son of the incumbent Delta State SSG’s, Mackson Macaulay, a serving judge in the state, two women, one of whom was kidnapped in Ellu town, and the attack on the Nigerian Prison Service escort van in Warri last year, during which two prison officials were killed,” it added. [Vanguard]