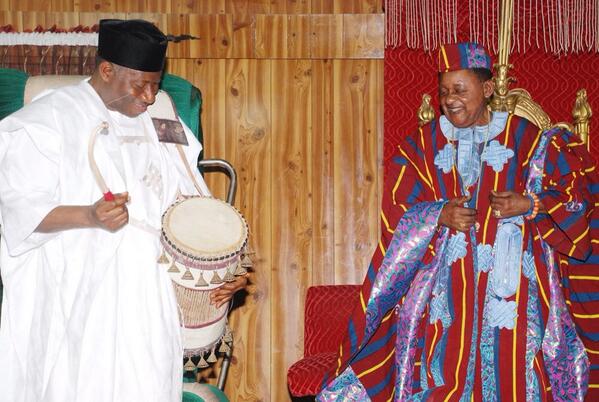 President Goodluck Jonathan on Saturday visited Oyo town where he met with the Alaafin, Oba Lamidi Adeyemi for about 40 minutes. He commended the traditional and other South-West traditional leaders for their roles in maintaining the peace in the region.

The President, who expressed surprise at the crowd that heralded his arrival to the palace of the revered monarch, said he had intended to make the visit private.

The president, who flew into the palace in a Nigeria Air Force helicopter marked NAF 540, had earlier touched down at the Ibadan Cargo Airport, Alakia, en-route Ife, where he declared the 2014 Nigeria University Games, NUGA, open at the Obafemi Awolowo University, Ile-Ife.

At the palace of the Alaafin, Mr. Jonathan was received by the Oyo State Governor, Abiola Ajimobi; his deputy, Moses Alake; the Aare Musulumi of Yorubaland, Abdul-Azeez Arisekola-Alao, and Peoples Democratic Party, PDP, leaders in the state.

The President told the mammoth crowd that came to welcome him that he had come home to visit his ‘father’ (Adeyemi) on private matters, noting that he was not expecting the kind of coverage arranged for the visit. He, however, acknowledged that as the leader of the country, his activities cannot be hidden.

He said part of his mission was to also thank the people of the state and the entire southwest region for giving him and PDP support during the 2011 elections. He, however, refused to speak further to avoid being misinterpreted as campaigning.

He said: “I thank not only the people of the state but the entire Southwest for the support we received in 2011. I have come to reciprocate the gesture with the hope that things will continue as well. We are one, I remain your own”.

Oba Adeyemi initially refused to speak to journalists, who wanted to know the purpose of the president’s visit, except choosing to say that his guest was on a private visit.

But when prodded further on the likely effect of the visit on the state’s politics in 2015, the monarch said President Jonathan did not discuss politics with him and that he was only thankful for the peace reigning in the state and the country.

Oba Adeyemi added that the president enjoined him and other traditional rulers in the country to ensure that Nigerians continue to live in peace with one another.

A former governor of the state, Dr Omololu Olunloyo, who was present at the meeting, told journalists that President Jonathan did the right thing by visiting the Alaafin and the Ooni of Ife, Oba Okunade Sijuwade.