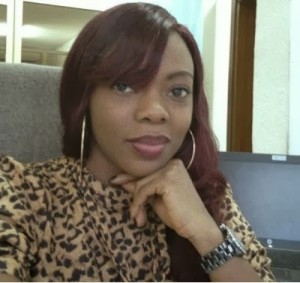 This innocent lady Above, met an Ikwere Dr who worked with the commissioner for health (rivers state). And some how they hit it off. He was so possessive and had total control of her. Being the naive girl she is, she gave in to all he did almost worshiped him. He cut her off from her family and friends poisoned her mind against them. He made her see him as the only one she could trust.

They got engaged and soon after she could no longer take it cause she found out he was married but his wife was in South Africa. She called off the engagement but he wouldn’t have it.

Then he started threatening her. She managed to escape a kidnap he planned. Later he started sending her threat texts and mails. Blackmailing her that she must come back or else he ll ruin her life. That if he couldn’t have her no man ever will and he would make sure of that.

Her boss helped her by reporting the issue to the commissioner for health since that was his boss. And in less than 1hour all the pictures were down. Her reputation was soiled but she managed to pick up the pieces.

Now how many years later it re occurs this time even having larger publicity. She lost her relationship, her job, her life. The only way she knew how was suicide.

If she dies, this man would have stolen a rare gem from the world. She not only was decent but had a wonderful heart. Such a big heart. It will never be well with the man, there is no peace for the wicked.

We all are praying that she will make it through this struggle with life n death though when I look at her lying there I seem to think she has given up already. I know when theres life theres hope but her lifes been ruined. Her character defamed n rubbed in d mud.

People are wicked. His turn is coming. Judgement will catch up with him….

That’s the story as far as I know it. She had such a remarkable voice, great talent. And yes one more thing; she isnt a gospel artist. Just a young lady talented in singing who had plans of getting a record deal and affecting the world positively…