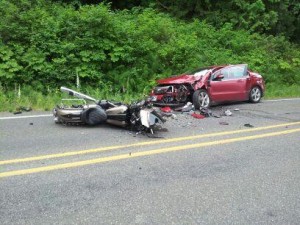 A ghastly auto crash that occurred at Magama Gumau Village along the Bauchi-Jos road yesterday in Bauchi state has led to the loss of two lives. Three others sustained injuries.

Eyewitnesses said that the two people on the motorcycle died instantly when they collided with the Honda civic vehicle which was on top speed.

State FRSC commander, Mr.Sunday Henry olatunji, who confirmed the accident said that two people driving on motorcycle were killed instantly while three other people sustained injuries in the autocrash.

“All the victims of the crash are men. From investigations, the accident happened as a result of a head collision which led to the death of the two people on the motorcycle. Those that sustained injuried were the victims in the Honda civic vehicle”.

He said when officials of the commission received the information, they went to the scene of the crash and conveyed both the dead and injuried persons to the Toro General Hospital