A 37-year-old muslim cleric, Isah Salaudeen was caught on Thursday night trying to slaughter a young girl, Chiwendu Nkwocha who had gone to him for spiritual help in Ibadan. 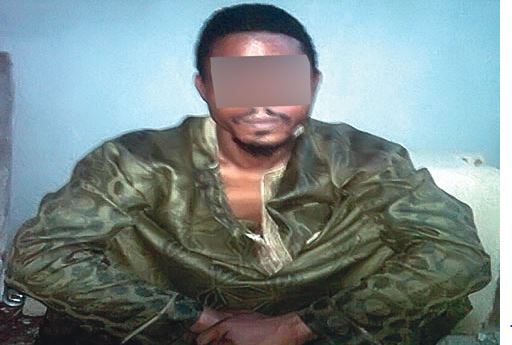 According to report, the victim, Nkwocha was brought to Salaudeen by her boyfriend, Bola, in January this year so that he would help in using prayers and other means to exorcise some spirits troubling her and she had been undergoing this ‘spiritual cleansing’ by being given herbs, concoctions and ‘holy water’ to cure her.

On that fateful day, Salaudeen had asked the victim to lie down while he covered her face with a cloth. She suddenly felt a sharp pain on her throat and before she knew what was happening, the cleric reportedly attempted to hack her with a cutlass to make his work faster when it seemed the knife was not achieving the aim intended. She then screamed, jumped up from where she was lying and ran out for help.

The incident was said to have been reported by one Aafa Taiye Agulofi and Ademola Agoro who resides in the same area with the suspect.

Salaudeen when apprehended, denied trying to deliberately kill the lady, saying he did not know what came over him. He said he believed he was manipulated by the spirits troubling Nkwocha to commit the criminal act and that he came to his senses later on.

Salaudeen, is currently being held at the Iyaganku Division of Oyo State Police Command while Nkwocha is said to be receiving treatment at the University College Hospital (UCH), Ibadan.

The spokesperson for the Oyo State police command, Olabisi Okuwobi-Ilobanafor, a Superintendent of Police, confirmed the incident, saying that the suspect would be transferred to the State Criminal Investigation Department, Iyaganku, Ibadan, for further investigations.