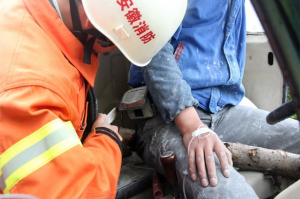 A Chinese driver was landed with a few splinters that he would rather forget about after his crotch was impaled by a tree trunk.

Aptly named Wang Yang, the car owner, 43, had to be freed by local firefighters after his truck crashed in Wuhu, Anhui Province.

The painful incident occurred as the driver collided with a tree that was obstructing the road on his way back from delivering farm produce to the city of Wuhu.

Local authorities realised the severity of the situation as they found the unlucky farmer was being held in place by the branch – which had gone completely through his crotch.

A spokesman for the fire department said: “I have never seen an injury like it. It was so incredibly painful that the driver had difficulty breathing and we had to cut him free quickly.

“We then sent him with the branch to hospital where he was operated on and it was successfully removed.”

The driver had reportedly found his brakes were broken as the tree appeared in the road, meaning he could not avoid the collision.

Wang Yang joins a series of drivers who have made lucky escapes on Chinese roads, after earlier this month a trucker survived a wooden pole puncturing his chest.

Although escaping with their lives, it would be a safe bet that both drivers are never more than a few inches away from a pair of tweezers.