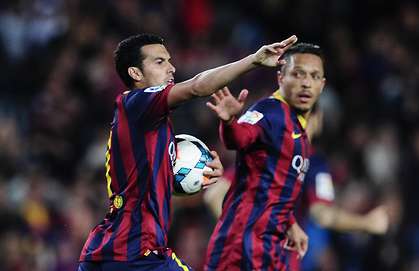 Barcelona have told Pedro he can leave the Nou Camp this summer and Liverpool are set to react by tabling a stunning offer for the Spanish forward before the World Cup gets underway next month.

Pedro has scored 15 goals in La Liga this season despite often being forced to play second fiddle to the likes of Lionel Messi and Neymar in big matches, with the Champions League knockout stages a perfect example of his growing frustration with a peripheral role for the Catalan giants.

The 26-year-old played just 18 minutes across four crucial ties for Barca when it mattered most and Liverpool now believe an audacious swoop will bring
a world-class signing to Anfield ahead of their return to the competition next season, according to the Mirror.

Reds boss Brendan Rodgers is a long-term admirer of the prolific Spanish international and now believes new Barca boss Luis Enrique will let him move on, particularly after he was left out of photos used for the club’s new kit launch released earlier today, along with Cesc Fabregas and Alexis Sanchez.

Rodgers believes Pedro’s versatility will make him a perfect partner for the likes of Luis Suarez, Daniel Sturridge and Raheem Sterling, but one of the summer’s biggest transfers would not come cheap.

The Mirror have tonight reported than a tentative Liverpool approach to Barca for the star was received warmly, with Reds chiefs informed that Pedro is available but only at the right price.

It’s now up to Liverpool’s transfer supremos to move quickly and get the deal done before Europe’s top clubs swarm to scupper any chance of a swift move, while persuading Pedro a fresh challenge in the Premier League is just what the speed demon needs.

Manchester United and Arsenal have also been previously linked with one of the continent’s most dynamic wide men, but both are now definitely trailing Liverpool in the bid to make him a Premier League player this summer.{GMS}