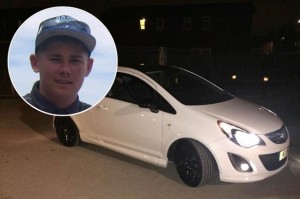 A thief who stole a teenager’s first car unwittingly HELPED with his insurance costs – by scoring a perfect 10 on the vehicle’s ‘black box’safety system.

Alex Cooper was left distraught when his prized Vauxhall Corsa was swiped from outside the Oldham skip hire company where he works, the Manchester Evening News reported.

But the 17-year-old, who had a ‘telematics’ unit installed to reduce his insurance costs by analysing his driving, was able to track down the vehicle using the system’s GPS feature.

The ‘i-box’ unit, which works like a plane’s black box flight recorder, measures speed, acceleration, smoothness and control – giving a score for each journey.

Alex found his limited edition Corsa in nearby Shaw, Oldham, three hours after it was taken – as it emerged the unidentified crook had scored a perfect 10 out of 10 for safe driving before ditching it.

Alex, from Moorside, Oldham, only managed 7.9 on the way to work. The unit, which allows Alex to monitor his performance via a phone app, means he can earn cash back for good driving.

Insurers Carrot say he will be allowed to keep the thief’s score on his record.

Alex said: “I found it quite funny that he drove better than me!”

Alex only passed his test in February and it costs him around £2,400 a year for insurance on the Corsa, owned by mum Kimberley.

The Corsa, which had its passenger window smashed and ignition tampered with, is still in for repairs – with an estimated bill of around £2,000.

Hairdresser Kimberley, 43, said: “We were absolutely mortified, it’s our pride and joy. But we laughed when we found it had been driven so carefully. We can only think they’ve driven like that to not arouse suspicion.”

A police spokeswoman said no arrests had been made over the theft.