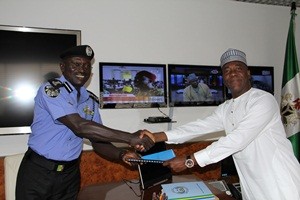 The newly appointed acting Inspector-General of Police, Suleiman Abba, has stated that all the reform policies of successive governments failed to transform the police because they (reform policies) did not focus on attitudinal change of policemen.

Abba, however, noted that of all the reform programmes implemented by various administrations only that of the Yar’Adua/Jonathan government had made impact on the Force.

Speaking at the Force Headquarters, Abuja on Friday, during his maiden address to men and officers of the Force shortly after his predecessor, Mohammed Abubakar, handed over to him, Abba stated that the missing link in the reform policies is the failure to change the attitude of the average police officer.

The acting IG said his team would also ensure that policing becomes truly intelligence-based and that enforcement and crime prevention initiatives are integrated and work side by side.

He said, “Of all the reforms embarked upon by the past governments, it is only that of the Yar’Adua/Goodluck administration that is working. We have seen the seven city programmes with the necessary equipment, we have seen tens of helicopters and other facilities in place.

“It is not the fault of those implementing or those that sat down and wrote the reform programmes, it is because one thing is missing, attitudinal change; the absence of attitudinal change in the Force is why the various reforms are not effective”.

Abba, while promising to build on the positive aspects that are firmly entrenched in the Force and to reinvigorate the areas where giant strides are expected, added that he would do whatever is necessary to curb the excesses of violent criminals.

According to him, senior police officers would henceforth be held accountable for their actions and inactions, by means of performance contracts and indicators, with clear deliverables which he said will be closely monitored.

He said, “The recent upsurge in security challenges will have my full attention. I am committed to addressing these issues and reaffirm the high standards of performance for which the Nigeria Police is nationally and internationally acclaimed.

“In consonance with the President’s Transformation Agenda, I will develop and implement constructive policing strategies for the maintenance of a stable democracy and economic growth”.

The police boss also assured that he would be guided by the needs and concerns of Nigerians; recognize and ensure the welfare of all Police officers; respect and protect human rights; cooperate with other security agencies and governments at all levels in the country, in order to achieve a safe and secure environment for everyone living in Nigeria.

He said, “My vision is to make the Nigeria Police Force a leading national, professional, and efficient law enforcement organization. A police force that is dynamic, robust and efficient; one that never rests or abdicate its professional duty; that studies and analyzes what works and what doesn’t, acknowledges and learns from its mistakes, and celebrates its victories.

“This is, indeed, our opportunity to redefine and rededicate our focus on our highest mission, which is to assuredly avail unfailing public safety service to the citizens of Nigeria. All aspects of our service will be centred on the values of Hardwork, Honesty and Humility –the triple H”.

In his remarks, the outgone police boss described the day as his happiest, adding that he was indebted to everyone in the Force, particularly the rank and file. He described Abba as his younger brother whom “I guided through the Police”.