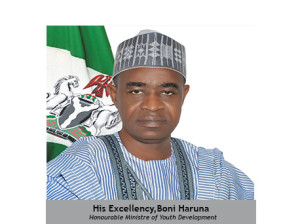 Top ranking members of the Peoples Democratic Party, PDP, including President Goodluck Jonathan, will not influence the October 11 governorship bye-election in Adamawa State, the Minister of Youth Development and a former governor of the state, Mr. Boni Haruna, said Thursday.

Mr. Haruna said the election will be unique because of the “noticeable unity of purpose among stakeholders” of the party in the state.

Speaking in Girei, Adamawa State, the minister described the development as a radical departure from the past where the president and PDP leadership usually influenced the choice of the gubernatorial candidate.

The ex-governor recalled that in 2007, the choice was made difficult because there was no unity of purpose in view of the fact that there were many governorship aspirants.

Mr. Haruna, who was on the campaign train of the state acting governor and PDP flag bearer, Ahmadu Fintiri, lauded the 11 governorship aspirants who stepped down for Mr. Fintiri to complete the tenure of the impeached former Governor, Murtala Nyako.

He also appealed to Adamawa citizens to come out in their numbers to vote for Mr. Fintiri.

“The elders of Girei are unanimous and have decided to mobilize the people for Fintiri in the October 11 election”, he said.