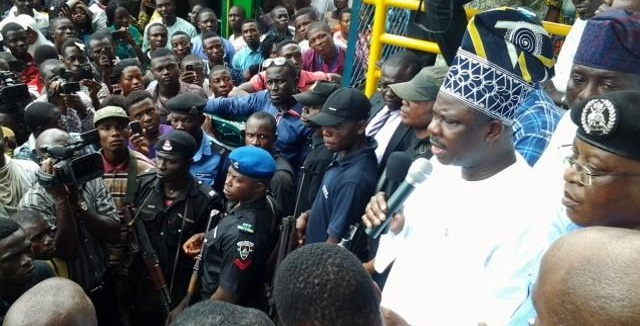 It would be recalled that a cross-section of workers under the banner of Senior Civil Servants of Nigeria, SCSN, had objected to what they described as selective salary payment introduced by the state government.

The association, an affiliate of the Trade Union Congress of Nigeria, stated its objection to the development in a statement by its secretary, Adebiyi Olusegun.

“The now familiar selective payment system embraced by the state government where public workers get their legitimate earning long behind due date and the payment in haphazard mode is totally unbelievable and unacceptable”, the association said.

“We submit that this unwarranted treatment of dedicated workers can only serve the purpose of further impoverishment of workers’ ranks where it is an established fact that our earnings are mere existential pay that secured neither the moment nor the future. Or how can one explain the paltry earning not being paid in time and some paid without recourse to dignity and pride in human labour?”

In its reaction, the state government affirmed it had carried out selective payment of November salaries and the delay in that of December.

The Secretary to the State Government, Taiwo Adeoluwa, expressed government’s understanding of the worker’s plight and promised that the problem would be resolved soon.

He said despite the dwindling revenue allocation from the Federal Government, which had adversely affected all the states in the federation, Ogun State had kept faith with workers through prompt and regular payment of salaries, pensions and gratuities.

“We are proud to say that since the last 42 months that this administration has been in office, we have not defaulted on the payment of workers’ salaries”, he said. “The delay in the payment of November 2014 salaries to certain categories of workers is definitely unusual and will soon be sorted out.

“We hereby assure all the workers and their unions that efforts are being made to ensure that they all have a good Christmas and New Year celebration”.

On the issue of co-operatives and other deductions mentioned in the letter by the Joint National Public Service Negotiating Council dated December 16, 2014, the SSG said most of the outstanding deductions were inherited from past administration but government is set to work out an arrangement with the workers on the payment of the deductions.