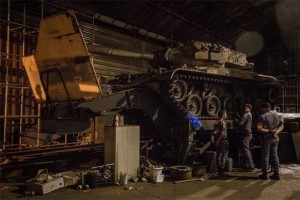 Brazilian police who were searching for stolen vehicles said they found two unidentified tanks in a warehouse raid, as well as 500 stolen TVs, a semi truck and auto parts. UPI reports:

Police said they raided the São Paulo warehouse near the Tamanduatei train station Monday as part of an investigation into stolen vehicles and they discovered “approximately 500 42-inch LED televisions,” along with “a semi-trailer truck, various automotive parts and two armored tanks of the armed forces, without any identification.”

The owner of the warehouse told police he had been renting the property out and was “unaware of its use.”

Police said the tanks were partially dismantled and did not have any weapons. Investigators said they determined the trucks were not army property and they are attempting to determine the origins of the military vehicles, which police said are believed to have been purchased at an auction.

“It is unusual, to say the least, that police officers searching for stolen goods and cars, instead find two tanks,” Police Lt. Andrei do Carmo told Globo TV. The manager of the warehouse was arrested, police said.