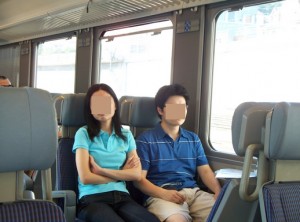 A train employee has been arrested, charged and convicted of sexual assault after reportedly pleasuring himself on a pregnant woman, prosecutors in Connecticut said. Worldwideweirdnews has more:

35-year-old Manny Ramos of Brooklyn, New York, told police that he pleasured himself on the sleeping woman because he had a hard day at work.

At the time, Ramos was training to become an engineer and complained of having marital problems. He said that around 8:00 a.m., he started having unwanted thoughts, and the next thing he knew was that he was pleasuring himself on the woman.

The 33-year-old victim, who was six months pregnant at the time of the incident, told investigators that she screamed for help, but no passengers came to her aid.

The woman said that she is afraid to ride on trains because it might happen again. A judge in Bridgeport, Connecticut, sentenced Ramos to two years in prison, which was suspended. He was also ordered to register as a sex offender and three years probation.