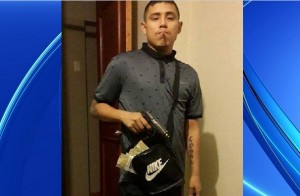 A man from Peru has been arrested after looking for work as a “hitman.” The man set up a Facebook page, where he advertised his “services” as a contract killer. Read more Scoop:

38-year-old Jonathan Giraldo attempted to hide his identity with the alias “Tony Garcia,” and he nicknamed himself “Anthrax.” Police tracked him down after he used real videos and photos of himself posing with weapons, including a pistol with a silencer attachment and bundles of cash. In his fake profile, Giraldo, who also referred to himself as the “Most Wanted,” wrote: “in the streets you learn more than in school.”

Police arrested Giraldo in his apartment in Miraflores in the Lima Province. Police said that they arrested the suspect while he was updating his profile with more claims of his criminal adventures. Police spokesperson Leonidas Menendez said that at this time, Giraldo is being held on charges of possession of firearms.

“The truth is that at the moment, we don’t know if the suspect really is a hitman or if he is just a fool with making up a fantasy life in his bedroom,” Menendez added. Police are doing ballistics checks on the guns, which were confiscated from the home, and they are also looking at Giraldo’s bank accounts to see if there has been any suspicious payments.