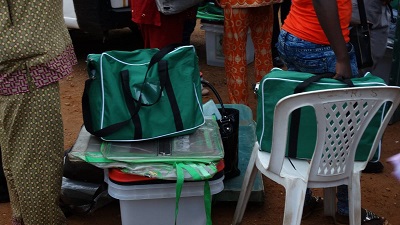 One of the accredited observers for the 2015 general elections, the Church of Nigeria, Anglican Communion, said on Monday that some presiding officers and ad-hoc staff of the Independent National Electoral Commission, INEC, were compromised during the conduct of Saturday’s presidential and national assembly election.

The church also described as “unimpressive”, voters’ turnout and expressed concern that the number of permanent voter cards issued to voters was not commensurate with the number of votes cast.

Speaking with journalists at the Independent National Electoral Commission office in Lagos State, the Director of Civil and Political Affairs, Anglican Diocese of Lagos Mainland, Ven. Folarin Shobo, said many voters are still yet to trust the electoral system due to fears that their votes would not count.

The clergyman, who also observed the conduct of the elections, said the poor turnout was unexpected of Lagos residents.

He said, “Many people have not been able to collect their PVCs and people are lacklustre to respond.

“There is apathy on the part of Nigerians to voting. One of the factors is that they still do not trust the system. Many voters still believe that their votes will not count. ‘Why do I need to waste my time?’ they say.

“Though people may say the turnout was large, it was not commensurate with the permanent voter cards on the streets”.

Shobo added, “As the Director of the Civil and Political Affairs, Diocese of Lagos Mainland, I visited 52 churches to conduct voter education.

“The response was not commensurate with what we expected. What the voters have done is to express their sentiments – emotional, poverty, religious and tribal. So, voting was not done based on the conviction and assessment of contestants.

“Some of the ad hoc staff are not faithful and sincere. They were compromising, forgetting that they are also Nigerians and that once these general elections are over, their citizenship reverts and the immunity they enjoy expires.

“So, they are supposed to assist INEC as citizens that have been so privileged to be among those who would use their God-given intellects to put the system right”.

The Anglican Communion further noted that INEC had spent a lot of money to train ad-hoc staff and therefore questioned the reluctance of the staff to attend the training.

“How did INEC come about the 700,000 ad hoc staff? When they were called for training, how many of them responded?” Shobo asked

He, however, urged the electoral body to begin preparations for the 2019 general elections on April 13, 2015, so as to make things better.

The Church praised INEC Chairman, Prof. Attahiru Jega, for introducing innovations aimed at putting the nation’s electoral system on a progressive path and called on stakeholders to support the initiatives.