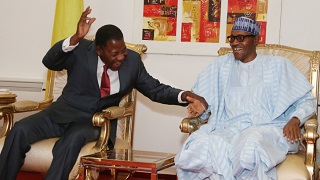 The President of Republic of Benin, Boni Yayi, Thursday assured President-elect Muhammadu Buhari of his country’s support in tackling the problem of insecurity in the country.

The Beninoise president also revealed that 55 percent of his country’s population are Nigerians.

Mr. Yayi stated this when he visited Mr. Buhari at Defence House, Abuja.

On cooperation, Yayi said there was need for the two countries to strengthen their ties as they share common culture.

He said: “Benin is the 37th state of Nigeria and Nigeria is the 7th department of Benin. Fifty-five per cent of the population of Benin comes from Nigeria; and at home here, my brothers and sisters in Nigeria have recently chosen my senior, President Buhari, as their president in order to lead their destiny.

“He is well known to people for his integrity, his experience as a former head of state of Nigeria, his patriotism and his ability to take up the challenges in Nigeria and our sub region are facing today, mainly Boko Haram issue, peace issue, ECOWAS issue. Mainly, Nigeria’s economy has been hanging the sub region’s economy.

“Mr President, you are an able man; you can deal with all the issues. May almighty Allah lead your step so that your mandate is successful to Nigeria, the sub region and the world”.

While congratulating the president-elect on his electoral victory, he noted that “Benin and Nigeria are very close in the area of culture, tradition and the two countries are bound together. We will always be by your side and support the great people of Nigeria. After his inauguration I will come back and together we will examine the status of our cooperation. We need to strengthen our cooperation”.

In his response, the president-elect thanked the visiting president for identifying with Nigeria during it trying period.

“I am truly impressed with the prepared speech delivered by the President of Benin and we thank him very much for identifying with Nigeria. Being so close a neighbour and with the ethnic and cultural affiliations which he identified, is making it easy for Nigeria, especially on the security aspect.

“He has identified himself and his country with our major problem, the security challenges in the North East and Boko Haram – and he has voluntarily identified himself with the sub region of Chad Basin and being part of it in trying to stamp out the insurgency in the North East, which Nigeria is taking the biggest punishment so to speak in terms of the security and how it affects commerce and industry”.